Wundes on drag and Season of the Witch

Wundes has been a favourite at Mary’s Poppin for a few years now, but for their first ‘one-woman’ show, Season of the Witch, they’re bringing audiences something a little more conceptual 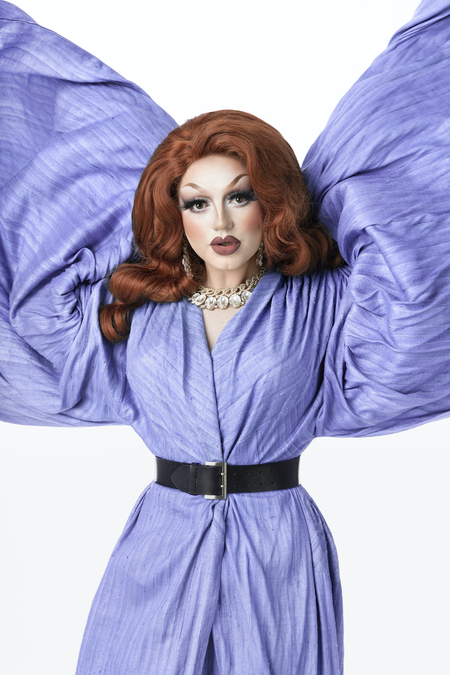 “I get to have more of a storyline, even if it’s a bit of a David Lynch type storyline,” says Wundes. Featuring some of the most popular – and obscure – music of transformative and metamorphosing performers like Kate Bush, Judy Garland, David Bowie, Stevie Nicks and Lana Del Ray, Wundes’ story is one of vulnerability and power. “I want to have this deal with god, to quote Kate Bush, to swap places with these people and walk in their shoes,” they say. “These are the people who, when I first saw, I really related to and saw myself reflected in instantly. They were telling me something through the music or imagery that made sense to me naturally.”

For Wundes, the journey to the stage truly has been one of transformation and vulnerability. “I always dressed up in the privacy of my own home,” they say. “I started doing a lot of the Feast Festival stuff, especially when I was underage and they would hold those Genderf*ck events.” But things were pretty stagnant. “I went through a hard time and stopped doing anything. I needed something to do creatively and challenged myself to start to do makeup to impersonate other people and take photos of that.” When Wundes joined Instagram, they were discovered by Mary's Poppin’s owner, Steven Craddock, and the rest is history.

“When I started I didn’t have anything,” Wundes explains. “I didn’t have costumes or anything like that, so I was going to Savers like, ‘Okay I need 80s clothes for Cyndi Lauper.’ Then I started taking it a lot more seriously, not just as an impersonator, but with people’s movement, trying to emulate that.” For Wundes’ first solo show, it felt natural to become figures like Bowie, Bush and Garland. “I think all their music has a sense of vulnerability about it, and they each use it in a different way. Especially Kate Bush, in certain circumstances, and Judy Garland, who is seen as a tragic figure but also an icon. So it’s looking at why they’re tragic, why they’re icons, where does the power come from and how do they take it back?”

In drag, perhaps more than any other art, there’s true magic in this kind of transformation – in becoming the stars you want to inhabit – and the effect is empowering. “It changes my personality, I think,” says Wundes. “I become freer. I could be standing there singing, like I did years ago, and people would just walk past. But, as soon as you put the wig on and the dress and the makeup, people look at you very differently. They treat you differently, and I think that’s where that transformative power, or that bit of witchcraft lies. I guess it’s the same thing as Snow White and the old lady with the apple. It’s a fantasy and people indulge you in your own fantasy and they lose themselves in that fantasy too, and I think that’s quite powerful.”

Garland, Bush, Bowie, and Nicks are icons of the marginalised – their fans are cultish and queer, weird and otherworldly. There’s good reason why their music and styles have stood the test of time. Like many outsiders, at one point or another they’ve all called themselves a witch. “Judy Garland called herself a black Irish witch in a lost tape in the documentary, Sid and Judy, which I hadn’t heard her say before, but that makes sense,” says Wundes. “Kate Bush has been called a witch – or witchy – and Stevie Nicks as well. Even David Bowie has a bit of that black magic type, with his mime work and the magician vibe.

“I was always obsessed with witches, ever since I was five years old,” says Wundes. “All I ever wanted to do was be a witch on the stage, so when I got the opportunity to start doing my own show, it just seemed natural to do that. It’s interesting the icons that I like all identified in that way, so the show is thinking about what that means.”

As drag continues to explode into the mainstream thanks to the juggernaut that is RuPaul’s Drag Race, it’s exciting to see local talent step so highly up to the plate. For Wundes, who is inspired by the likes of Brisbane’s Vollie Lavont and RuPaul alumni Sharon Needles and Jinxx Monsoon, the show will be like seeing David Bowie as Glinda the Good Witch. “If you’ve ever felt alone or wanted to trade places with anyone, this is the show that talks about that,” they say. “It’s a show about overcoming the shadows and demons you need to let go of to shine and be yourself – with a bit of magic thrown in.”