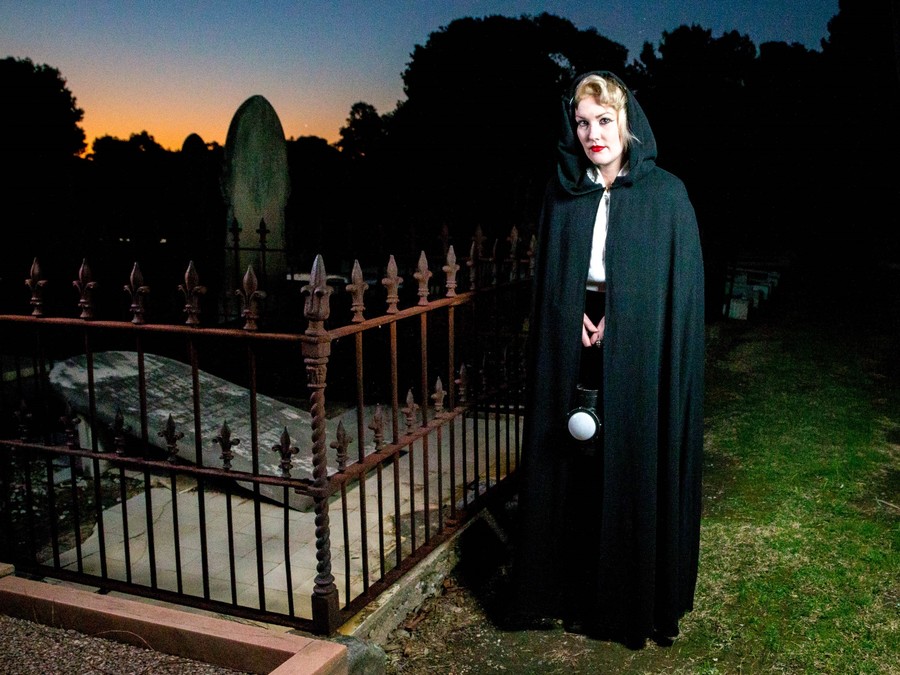 In the summer sunshine with hectic festival life playing out on the streets, it’s easy to forget that there’s a dark side to Adelaide. What better way to learn all the details than to step away from the bright festival lights and follow a guide into the darkness?

Home to over 143,000 souls over 27 sprawling hectares, West Terrace Cemetery is a must-see for anyone keen to discover some of Adelaide’s creepiest and most intriguing history. From its earliest days, the cemetery was dogged by controversy. Although Colonel William Light wisely chose the site due to its proximity to the fast-growing colonial town of Adelaide, not everyone was keen on having a cemetery so close to home. It didn’t help that the cemetery’s first Sexton, John Luke Monck, was something of an unorthodox operator and attracted his fair share of criticism.

If you’re brave enough to wander the headstones, you might just run into West Terrace local Ada Hassett in her nightgown cradling an axe – the same axe she took to her new husband as he slept in their room at The Golden Rule Hotel on Pirie Street. Was it a murder spurred by jealousy? Or a woman with poor mental health left untreated at the beginning of the 20th century?

Just half an hour out of the city centre sits one of Adelaide’s oldest and most notorious locations – Port Adelaide. The old mangrove swamps and muddy flats may be mostly paved over and historic colonial buildings line the avenue, but Port Adelaide was once a stinking, mosquito-infested swamp. It was sometimes known as 'Port Misery' just three years after it was founded in 1837, and has since been home to all kinds of mysteries, murders and strange disturbances.

Legend has it that one can still hear the groans of a Chinese man found brutally murdered in the river – his head wrapped in a hessian sack with three nails skewed in his skull.

Then there’s the story of the Russian sailor who was kicked to death in Todd Street. His ghost still haunts a basement, ever searching for his shipmates. But it’s not all spirits at the Port. It’s also full of some of Adelaide’s most important history, where the buildings sink into the street and the layers of the past seep up from the earth.

On the outskirts of the city, the Old Adelaide Gaol looms over the train tracks. At night it’s an eerie site, and inside the old brick walls you can feel the history – and its darkness. With 45 hangings and its own burial site, it’s perhaps not surprising that it’s one of Adelaide’s most haunted sites, with 12 spirits who are said to wander the 147-year-old building.

Some say you can still hear the footsteps of William Baker Ashton, the first Governor of Adelaide, whose apparent wrongdoings (including drunkenness, misusing government property and trafficking with prisoners) caused quite the scandal. When he died in his office, the undertakers couldn’t carry his body down the steep and narrow stairs, so he had to be lowered out the window. It seems death hasn’t stopped the once judicial manager, and the sounds of filing cabinets and doors slamming still echo from the office today.

Adelaide can get hectic during Fringe and sometimes a city break is key. Luckily, located just outside of the stunning Barossa Valley sits the town of Kapunda. Established in 1842 as a copper mining town, Kapunda has since become an agricultural centre with cereal crops abound, and – of course – wine!

But it’s not all pastoral peace and rolling green hills. The town’s unassuming colonial pub is, according to locals, experts and television documentaries alike, 'the most haunted town in Australia'. Opened in 1849, The North Kapunda Hotel gained a reputation after the Riot Act was read aloud for the first time to 500 unruly locals from the balcony. As one of 22 pubs running during the mining boom, it attracted some unsavoury types and is home to a few suspicious deaths, such as the man who shot himself repeatedly in the throat.

If you’re brave enough to encounter the ghosts of Adelaide’s most haunted location, head on out to the Barossa Valley for a wine, a nice dinner and a spot of ghost hunting.