The #MeToo and #TimesUp campaigns have flooded the entertainment industry and social media feeds of late. Fest speaks to the artists working tirelessly in the space where comedy and feminism work together as a vehicle for social change 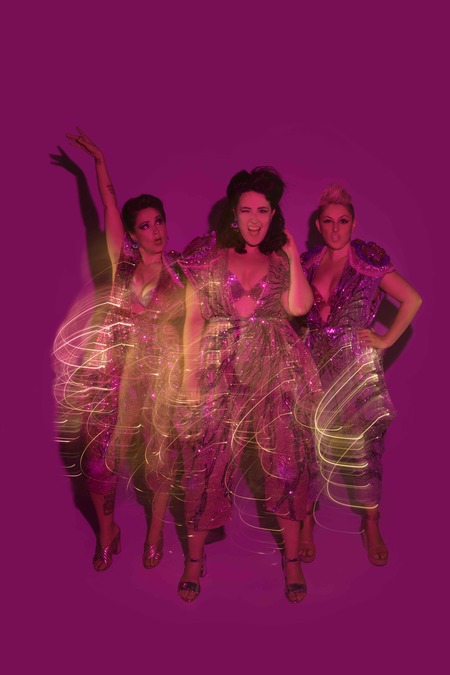 For women working in comedy who have been combining the political and personal with humour for years, the movements and conversations they are creating are not only urgent and important, but provide an opportunity to contribute to the fight.

For the Fringe Wives Club, the trio behind Glittery Clittery: a conSENSUAL Party, comedy is the best weapon in their arsenal. “We’ve all got a belief in comedy being a conversation starter,” Tessa Waters explains. “Comedy draws people in, makes people safe,” adds Vicky Falconer-Pritchard, “and we operate in the thin line between laughing and provoking change.”

When asked about their favourite artists working in this space, all three Fringe Wives bubble over with enthusiasm, yelling the names of their heroes down the phone. “Zoë Coombs Marr is totally trailblazing in terms of bringing new conversations and new ideas,” Waters says. “It’s a really exciting time to be making this kind of work.”

Coombs Marr, best known for her Barry Award-winning hit Trigger Warning and its precursor Dave, is premiering her new show, Bossy Bottom, at the Adelaide Fringe. While Coombs Marr “never set out to make feminist comedy,” she acknowledges that being a woman on stage is an inherently political statement.

“I’m not trying to make something that’s overtly political in any way," she asserts. "Of course it will come up because that’s what interests me, but the most political and conceptual way of doing this show is just to stand on stage and be myself and be funny. That feels political in itself.

“Being a woman changes the way people see your comedy; who it’s coming from is as important as the joke itself. I feel like I am politicised as a queer woman on stage, particularly on a comedy stage. I don’t have a choice about how I am perceived, but it is up to me how I choose to use that.”

In Dave and Trigger Warning, Coombs Marr performed as a male comedian, Dave, complete with neckbeard. The subversive shows began “in response to real frustrations about the standup environment.” Ironically, the success of playing a male hack comedian has given Coombs Marr more confidence to be herself than ever.

“I’m in a privileged position now where I can speak as myself," she elaborates. "I started standup as a teenager, but for the last six years I’ve only been Dave. Now I’m coming back to a place of being myself, and seeing if that is possible.”

Stripping away the façade and embracing her own body still gives Coombs Marr the opportunity to speak to her frustrations and her life. “There’s heaps of gay sex jokes,” she quips.

Both the Fringe Wives Club and Ava Bogle of The Pleasure Project also explore female embodiment within their work. For Glittery Clittery, the group made a decision to use costuming as an entrance. “Historically we expect women in sequins to be seen and not heard,” Rowena Hutson (Fringe Wives Club) remarks, “so to be silly and gross means people get to see the realness of our bodies.”

“Our bodies, as women, are objectified from the beginning, so women using their bodies to regain that power and to communicate is in line with feminism and body autonomy,” Waters continues. “We dress provocatively, we embrace our bodies, and we say we look fucking good because we do.”

The Pleasure Project explicitly examines female sexuality and it’s a topic that Bogle feels strongly about. “Women are taught that sex isn’t for us, it’s for men," she says. "Virginity is lost, given away. It’s not about your pleasure. Women haven’t learned to value it for themselves.”

To break through the ingrained misogyny and stereotypes that we all carry, Bogle uses otherworldly characters to look at sexuality from an outside perspective. The aliens in her show “ask 'why' about a lot of things – why body shame, why can’t women always have orgasms, how can we be so screwed up about sex when sex is one of the main things we were put here to do?”

Ultimately, all the artists agree with Waters: “Being who you are, saying what you feel, and having autonomy over that is an act of rebellion.” But they also acknowledge the responsibility to create a safe space for everyone in the audience; be they men, women, or non-binary.

Coombs Marr states that “a space that is safe for people is often maligned [by using derogatory terms such as] ‘precious snowflakes’ or ‘politically correct toned-down humour’ – but that’s totally wrong. Comedy has always been a safe space for straight white men who can always speak to their perspective, and cuts off others from being able to do that. The challenge of creating a safe space for the [whole] audience is greater. My material is so blue and fucked up, but [it proves] that you can be edgy without making ableist jokes or making people with trans bodies feel uncomfortable. Safe does not equal shit.”

Falconer-Pritchard from the Fringe Wives Club agrees. “Feminism means you are standing for all forms of equality. We’re not just fighting one fight, we’re making space for equality more generally. We want the show to be fun and inclusive, and if you come out of it a bit more informed, that’s great.”

Hutson adds that comedy as a genre “has a really rich history of being deeply political and subversive.” For the Fringe Wives Club, that means looking beyond “straight white lady feminism” to carry a political message that “we’ve worked really hard to make sure is intersectional.”

For Bogle, “comedy is [a more] effective vessel for social commentary than a lecture. The show is really funny. It’s not just me being angry, it’s a real joy."

Whether through aliens, music and dance, sequin-covered and champagne-fuelled cosmic feminism, or even the ultimate political act of standing on stage as your raw self, these three shows offer a chance to laugh together through rallying cries and subversive humour. They create a space where everyone in the audience feels welcome, and everyone leaves feeling a little more empowered. “The monster has to come out so we can slay it,” says Bogle.

The monster may be present this festival season, but these artists are doing their part to make sure it’s not around for the next generation of comics following in their path.