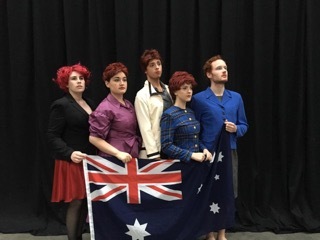 Musicals about Australian politicians always seem to land well amid a government that is constantly the butt of the nation’s jokes. But the folks behind The Colour Orange: The Pauline Hanson Musical belt out some food for thought: "Maybe the joke is on us?"

The Colour Orange details the unfortunate resurrection of Hanson’s political career, rising once again from the disgraced ashes like a racist phoenix. Backed by a quintet of musically gifted John Howards ('The Flaming Howards') – characteristically marked by tracksuits and bushed brows – this musical would most likely fall shorter than it already has without them.

While there are some unquestionably funny moments within this polished musical, this concept falls far from the execution of something like Abbott! The Musical and seems lacking in content beyond merely detailing Hanson’s political career. The standout moments instead come from the white Australian stereotypes portrayed by the supporting cast members.

This review has been edited from the print version, in which the musical's cast was inaccurately referred to as 'all-white'.