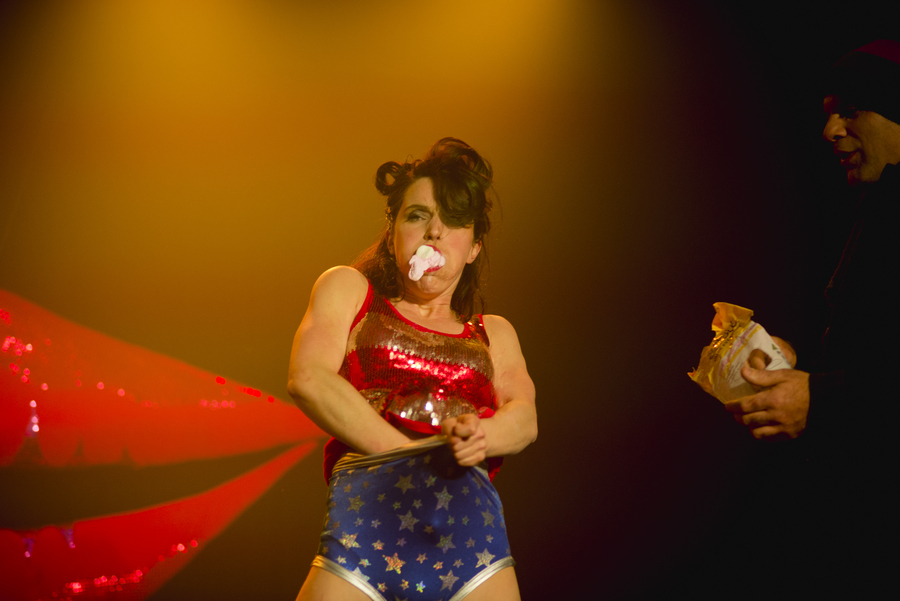 In an age of increasing global anxieties – be they political, economic, or environmental – live performance is being left with little choice but to respond. Sometimes it’s in the form of satire, sometimes it’s pure fury. Sometimes, in the case of Can’t Face, it’s debauched circus that has no intention of taking itself seriously.

From the aptly named Circus Trick Tease company (previously known for the award-winning children’s show Children Are Stinky), Can’t Face throws acrobatics, lewd burlesque, slam poetry and puerile musical parody into a blender and slams the ‘pulse’ button. Somehow, in its diverse hour, it manages to skewer right-wing politics, the environment, religious celibacy and contemporary dance. Such a menu might seem stodgy, but when the tools they use happen to be witty, self-aware circus, smart choreography and (mostly) inventive tech, it becomes a remarkably light and zippy variety show.

This bears repeating: all that serious stuff is under the surface. Can’t Face is a hilarious romp first and foremost, full of hip-hop nuns, penis balloons and songs about excrement. The pacing could be a notch tighter, and it’s not a clean sweep of winning routines, but the weaknesses are outshone by some wonderfully disgusting moments of excellence.