While festivals are feel-good, can they help us to do good? 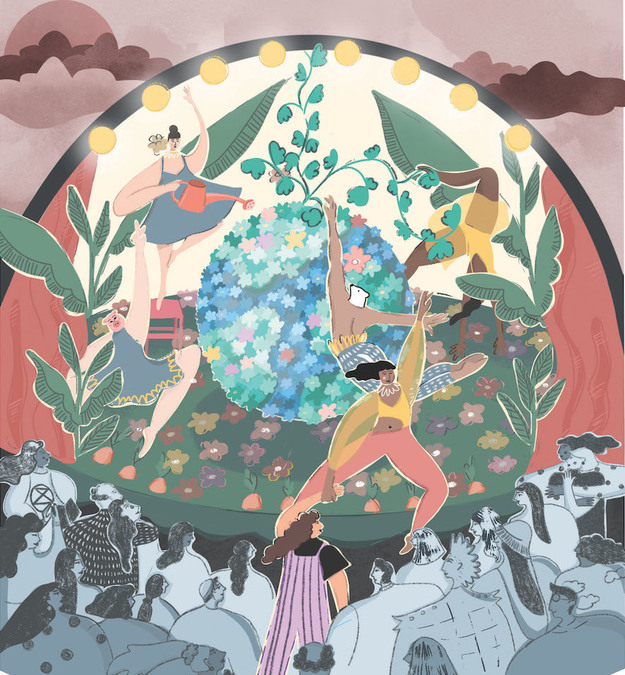 As the World Tipped

"As the World Tipped was made ten years ago. We look back at ten years of hardly credible inaction. Writing this, as our house is surrounded by fire and we hear of 500 million Australian indigenous animals burnt to death, it is hard not to fear that Tipping Point has arrived. Our continuing inaction risks committing our children to a terrible future, the endangering of human society and the extinction of millions of species. How could we allow this? How could a nation as rich and educated as Australia, inhabiting the world’s hottest and driest continent, not be at the forefront of pressure for global change. Now. The time has come for a behavioural change that puts the cutting of carbon emissions at the centre of our lives. We have to look at each of our actions and take concerted action to elect politicians who are seriously committed to acting on our behalf and bring in laws that lead to drastic cuts in our emissions. It is not a time to be polite. We must create a vociferous and mass movement, one that celebrates our power to change, the excitement of that change and its absolute necessity. It is time for us to shine, as we show the world how quickly a dynamic people can embrace change and realise the excitement and potential of that change, reconnecting with country and the land that supports us. But we need to act NOW or face consequences for tens of thousands of years to come." [Nigel Jamieson]

Nigel Jamieson is writer and director of As the World Tipped, the spectacular outdoor aerial show confronting ecological disaster.

Because We Cannot Not

"The short answer is that I hope my work will provoke thoughtfulness about conscious adaptation in this time of climate crisis. Is that a behaviour? I think it is really – at least it is the precursor to behaviour. The world is changing, and so we must change our daily expectations, habits and understanding about how we inhabit the earth. Examples include talking about climate crisis (so as to raise awareness); making better daily decisions about gritty stuff like waste (with earth sustainability in mind), and when the time comes, to vote for political candidates with high environmental intelligence, intention and integrity. This is all a tough call – but once you accept that humankind can no longer dominate the earth, the corollary is to urge government toward sustainable laws balancing biocentric and human rights principles. We all have agency to act, be that in small or greater ways. Business as usual is simply not an option. Human behaviour must now change. Because we cannot not." [Tricia Ross]

Tricia Ross is a contemporary visual artist and graduate of the Adelaide Central School of Art. Using different media, her work focuses on both the beauty and frailty of the Australian landscape.

"The Abattoir remains a place of moral danger, a 'no-place', segregated, isolated, a place where slaughter happens, a place of disassembly, where endless chains of quivering impaled organs and body parts glide by on meat hooks, and where literally rivers of blood are flowing. Modernity is predominantly carnivorous, more than 90% of us eat animals. Abattoir Noir attempts to entertain you with a glimpse into the industrialized business of mass slaughter and the transformation of living animals into the meat we eat, a glimpse into the Abattoir. What behavioral changes would Abattoir Noir like to promote? For people to become better informed and make ethical choices when buying the meat we eat; to have empathy, to think for one extraordinary moment about beings as sentient as ourselves, and the unimaginable suffering that goes into every delicious bite. Even to just stop eating supermarket meat, not be involved in the massively profitable corporatised monopolised monstrous business of creating, confining and growing animal beings as nothing more than flesh machines." [Kenneth MacLeod]

"Reducing or eliminating meat products from our consumption habits is a great thing to do for our planet on all fronts, for our ecosystems, our communities and our whole selves. Eliminating those that are produced through the industrial system is a no-brainer. Although direct action is a great thing for those brave people willing to undertake it, we cannot underestimate the power of our consumer dollar. Our political systems may be corrupted and degraded, but money talks loud and clear. It is the voice of our values. We should use it." [Kate Stones]

Kenneth MacLeod and Kate Stones established The Red Room Theatre in 2011. Their latest work, Abattoir Noir, is a cabaret theatre show based on real-life testimonials from workers in the meat industry.

"We love this quote of Calvin in Calvin and Hobbes by Bill Waterston. 'It's not denial. I'm just very selective about the reality I accept.' If Dimanche can bring people to see a little better the contradictions and denial in which we are living, it is more a political change that has to happen and where decisions must be taken. We hope Dimanche brings people to want to engage themselves poetically and militate for real and concrete measures to be taken concerning the climatic urgency we are in. Of course, we also hope Dimanche brings poetry and shows the beauty of human relations, inspires mutual aid and kindness."[Sandrine Heyraud]

Sandrine Heyraud is part of Belgium based Compagnie Chaliwaté. Using old fashioned physical comedy and innovative technology, their new production, in cooperation with Focus Company, is set partly on the North Pole and assesses people’s capacity to be smart and stupid.

"Violent and Glorious Revolution! Then again our boy Chomsky debunks the whole radical behaviourism deal that was booming post-WW2 (in short: it's like me pointing at the sun, saying 'what's that?', and you describing my finger). Even if my audience were pigeons I doubt the show could change their behaviour. But if anyone is keen they should head to Bunnings; push over the sausage stall, steal the necessary elements for a guillotine; and start chopping. Then, yeah: Go Vegan. Join your Union. Eat the Rich. Blow up the Pokies. Kill a Cop. Sneak into our show. Be Queer. Commit Crimes." [Tobias Manderson-Galvin]

Tobias Manderson-Galvin is artistic director of MKA and leads with Doppelgangster’s Tom Payne to tell the story of COLD WAR – a jazz-punk theatre experience set in a motel room and exploring the climate crisis.