Baby Got Back’s love affair with the riotous nude 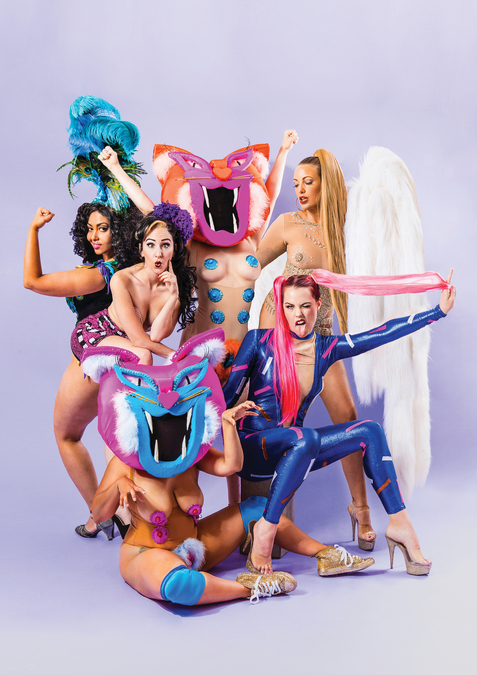 I’d just pitched the concept of a naked jump-roping act to my long time friend and co-performer, Jane. The other women in the show were on board with it, wiggly bits and all.

But they were seasoned strippers. They’d been whipping their kits off for years. Jane, a formidable burlesque star and no stranger to striptease, hadn’t publicly gone the whole hog.

She nodded furiously. “I want to. I WANT TO.”

Rehearsals were a riot. We skipped and jumped and laughed about the way our tits seemed to hit our chins. The way our thighs thundered and our skin folds flapped about in the air. The way the ropes would sting those vulnerable body parts with a mistimed jump.

That first opening night Jane was restless. There’s a kind of threshold you pass through when you’re coming to terms with being nude in public for the first time. It’s a mental rollercoaster that rockets past every memory of being taught to clothe yourself, to cover up. But as the ropes smacked the stage floorboards, Jane transformed into this joyful, jiggling wild woman; kissing her bicep and leaping with glee. She emerged backstage from a cheering audience, fists in the air, minge in the breeze, utterly victorious.

And so faithfully, every night, we pulled on naught but our sneakers, clobbered some glitter on each other’s fleshiness and sprinted around the front of the spiegeltent to await our music cue. We upped the stakes and presented a seven-woman jump-rope naked spectacular to several hundred people at the Artist’s Bar. We orchestrated a nude commandeering of The Garden of Unearthly Delights’ dodgem cars with well-known Fringe nudeys (paging Adrienne Truscott, Marcel Lucont), their stage technicians and two astonished strangers (it’s ok, they were French).

Our stark bods flitting about the Fringe space have always rustled feathers. The inherent belief that nudity equates to sex has seen us blocked from advertising on digital media or written off as ‘rain-coat brigade’ fodder by male reviewers. Elsewhere, public presentations of the female body continue to be policed, shamed and censored. Even with #freethenipple, #normalisebreastfeeding, #stillnotaskingforit we still have a long way to go. So this Fringe, try something new. There is ambitious, rule-breaking work happening nightly, beyond the major attractions. Watch out for nude bodies sprinting around a Gluttony tent. You’re welcome to jump with us too.