Ramsey Nasr interview: 'It will go on like this until the end of mankind'

Toneelgroep Amsterdam brings Kings of War, a drama based on several of Shakespeare's historical plays, to the Adelaide Festival. In a wide ranging interview, actor Ramsey Nasr chats about abuses of power then and now 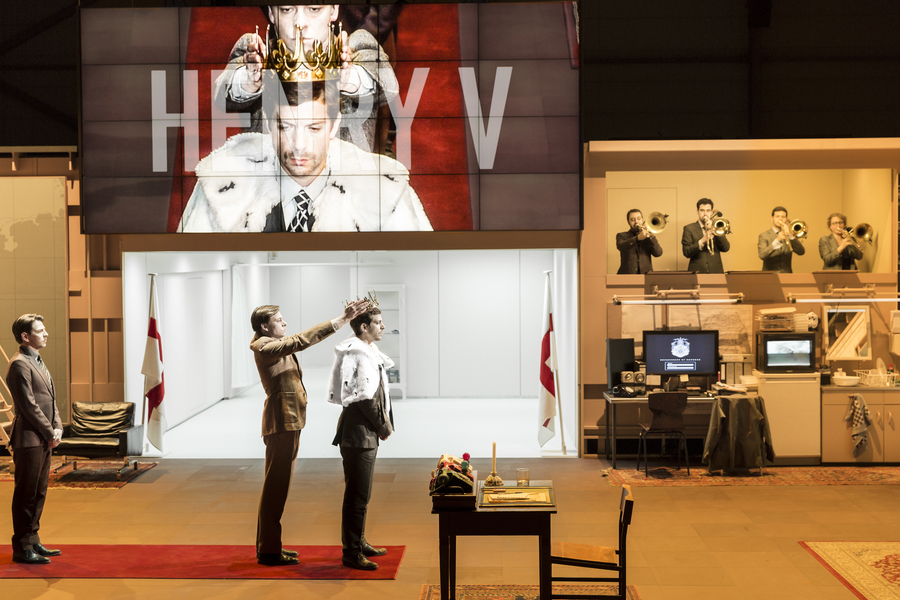 Does Kings of War have anything to say about the powerful figures of our own age?

"The play deals with three types of kings, so in that respect three types of leadership. I'm responsible for the first type [Henry V], the noble Christian king, but in a way his religion doesn't seem to matter. He puts his fate and the fate of his country and of his people in a higher context, be it religious, be it political, be it in terms of society, he doesn't do anything without checking whether it is really right to go to war, and he refrains from humiliating the enemy after he defeats them.

"Then there is the second king, Henry VI. He wants to be a leader but he is too weak, he has no solidity which causes not just political riots but civil war. He is the weak king who wants to do good but is unable to. It ends up with the third king [Richard III], who is the malign king, who only thinks in terms of his own benefit. Not even his friends can rely on him, so he is a Trump figure in a way who blows up all bridges, who doesn't care about diplomacy let alone a higher cause. It is pure cynicism and the will to get power and keep power... these three types of leadership are continuous. It has been going on like this since the Egyptians or even before, and it will go on like this until the end of mankind."

Kings of War director Ivo Van Hove says the performance shows man at his most noble and his most perverse. Is there a dark side to your Henry V?

"The historical Henry V ordered his prisoners of war all to be killed. In Shakespeare’s play he says this as an aside [and] in a way I think it is a pity that Hove or the translator left it out. At a certain moment he bluffs his way, he says to the French: ‘This is your last chance, I will forgive you, just surrender, if you don't do it we will,’ and he sums up some horrific images – putting people on spikes, killing babies, raping 14-year-old virgins, etc. The question is, is this the king who is really willing to do it, or is he bluffing?

"I call it the Mladić speech [named after the Bosnian Serb general and war criminal Ratko Mladić]. A Trump-like figure, but in war, and he doesn’t care about anything, constantly: 'I will kill them all and I don't care. I could kill 10,000, 20,000, 1 million. This is my style, take it or leave it, we will rape you all.’

"In a way, Henry V is bluffing his way into convincing the French that they have to surrender. He does this by pretending he is a kind of Mladić figure. It is not really a dark side of him, but shows he at least has entrance to this side. I hope the performance will be convincing in a way that you think ‘hmmm, there is a dark side to him.’"

There has been some debate about whether Henry V would be, by modern standards, a war criminal. Do you think he deserves to be hauled in front of the International Criminal Court (ICC)?

"The standards of early days are never the standards of now. You can see it in the #MeToo discussion. We are accusing people who did things in the 1970s – and they should still be accused – but there is a reason they were not accused of this in the 70s. Whether we like it or not, moral standards were different in the 60s and 70s than they are now. So I don't know if you can impose nowadays standards to that period. Perhaps I am too little informed about that.

"We could probably put all kings in front of the ICC, all Shakespearean kings, [but we need to remember that] the Henry V that Shakespeare described might not look at all like the actual one. Proof of this is in Richard III. He was not at all compared to Henry V or VI as this bad monster, that is just what Shakespeare made of him, so it’s difficult. Shakespeare’s writing was so impressive that we are confusing those images with the actual images of historical kings. Richard III was bad, but not that much worse than his predecessors."

Netflix's remake of House of Cards, which Kings of War has been compared to, explores abuse of power, yet behind the scenes actual abuse of power was allegedly being committed by Kevin Spacey. Do the real abuses taking place in the acting world ever feed into fictional portrayals of abuse of power, such as in Kings of War?

"He is the one, Richard III, who is not suffering from any conscience. He would abuse people in any way, so why not sexually? He doesn't want to be held accountable for anything. In a way he is sort of a Trump/Weinstein figure all in one... people like Richard III, people like Hitler, it is too easy to say: 'He was a monster, he was the personification of evil.'

"If we put them in a corner and say: ‘this is just evil, we don't even have to understand’, this frees us from our duty to understand how people come to that point. This is something from old times, where they would kill and eradicate people in the most horrible way, by amputating, by raping them, by gang-raping them, by torturing them in the most horrific way. How do people get to that point? This is something we should always try to understand.

"I am not making a jump from Kevin Spacey to Weinstein to Richard III to Hitler; I would be very sad if people understand me in this way. But there is a line, what does power do to people? Sometimes people did not know that they had certain desires to do something, to step over boundaries, until the moment where they got to the position where they realised they could do anything. This could increase certain desires, or even incite something, spark something, if you have the authority to do anything because people are afraid of you: ‘Wow he’s the boss, or he might be able to give me a job later on, or is responsible for my welfare.’ This is something of all times, of all professions, all races.

"I think it happens everywhere. As soon as people of ideals come into power, they will be less concerned for those whom they care about, or for the concerns that they have, less than for the will to stay in power and to use the power that they have. Power becomes an addiction and a means in itself. If you are malignant, like Richard III, like Hitler, or like Mladić, then there is no limit. If people get power, there is no limit to what people are capable of."