With distinguished authors, Twilight Talks and the thematic Zeitgeist Series, Writers' Week has something for everyone, says Jo Dyer 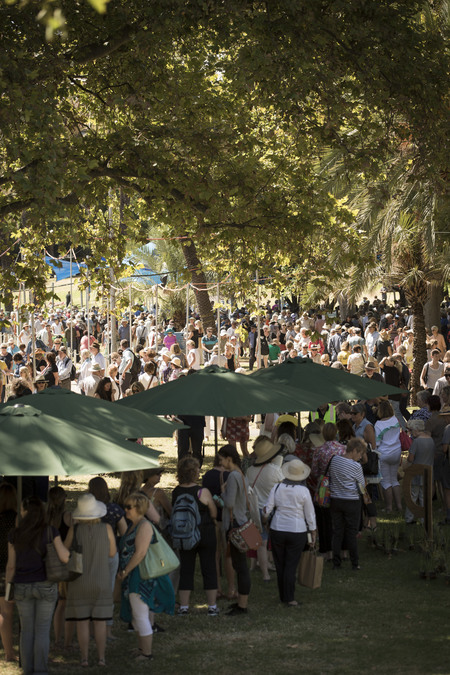 This year’s Adelaide Writers’ Week is director Jo Dyer’s first at the helm and she speaks of the festival with the passion of a local, having grown up here. "I think there’s something very special about it," she says.

Whereas the literary festivals in Melbourne and Sydney are ticketed, the free nature of Adelaide's makes for a more accessible event. "Being able to meander between different venues and different events really changes the nature of the festival. People make a decision to come to Adelaide Writers’ Week and obviously they’re hoping that there will be authors there that they have heard of, books they may have read, or issues of particular interest to them, but that’s not the first and foremost reason that they come. And I think that allows Adelaide to be a festival of discovery."

The previous director, Laura Kroetsch, was seven years in the post and leaves a legacy both daunting and enticing. Dyer says it is "absolutely vital" for her to keep the spirit of festivals past while incorporating her own ideas and extending the possibilities of Writers’ Week into the future. "There is such a strong and loyal audience base for Adelaide Writers’ Week," she says. "I’m not someone who thinks that loyalty and ongoing commitment equals a sort of tiredness, in fact the people who come year after year are in fact some of the biggest risk-takers because they come and they put themselves in the hands of a curator and they say 'we trust what it is that you’re doing' and 'we have trust and faith in this event', and I think that’s to be applauded."

One extension of previous programming sees the popular weekend events for children and families grow. These weekends now include events for middle readers, tweens, and young adults. "I guess it had been a bit of an omission," says Dyer, "there hadn’t been anything to cater for that middle reader and young adult readers. A lot of people had said they’d bring their kids to one of the days on the weekend but as soon as they were too old for the story tent, where could they go?"

Dyer explains that there are two areas to this new program: one for readers and one for writers. The first will offer events with authors of books for middle readers and young adults: "There’s a huge growth of readership and a very passionate [following], so we’re very keen to reflect that progress." The flip side is to create events for young creators. Dyer states that there has been a huge surge "in young people and teenagers writing to express themselves through spoken word and performance."

She adds: "The readership of poetry for that audience has a performance outcome, not just a literary one. So we’ve got some of that reflected in the program, collaborating with Writers SA and also Word Travels, which runs the Australian Poetry Slam, to bring some of the best poetry slammers to Adelaide and also to bring some of our local talent to the stage. We’re running two stages on the Sunday, one of which is your more traditional event with authors, and another which is more performance based which is young people performing their own poetry, really to try and encourage young people to see themselves not just as audience but also as creators."

Another addition for 2019 is the introduction of evening events "particularly for people who are working during the day who can’t rush down on their lunch break but would still love to see something." The Twilight Talks allow people to "come on their way home when it’s cooler, enjoy some music and a drink, and get a taste of what’s happening across the festival."

Meanwhile, The Zeitgeist Series will explore big themes. This series includes key contemporary writers and thinkers, such as Ndaba Mandela, Birgitta Jónsdóttir, Sohaila Abdulali and Soraya Chemaly. Dyer says the festival as a whole wishes to "include as many voices as possible."

This has not always been easy: "I think that has been one of the challenges and one of the great movements of this part of the 21st century," Dyer says. "People speaking from the margins, speaking from different positions and saying 'well, you can’t speak for me, you can’t know my truth if you haven’t heard it from me. Why not hear it from me rather than someone speaking on my behalf.' So I’ve tried to ensure that the program generally, and the Zeitgeist Series, does have a multiplicity of voices and does reflect diversity but not in a tokenistic way."

The festival will kick off with an Opening Address by Man Booker Prize winning author Ben Okri, speaking on the topic 'Imagination Redeems'.

"I think he is an incredible author, thinker and person," says Dyer. "He tries to take you through the looking glass, and [in doing so] he goes beyond the rational, very present debates around structure to [explore] what it can mean to be deeply human and how we can connect through humanity. I think he will set a tone of the open, human way in which we can engage with all of the ideas that hopefully will bubble up and be discussed throughout Writers’ Week."

The theme for this year’s festival is 'Telling Truths', which Dyer sees as an opportunity to "reflect the times in which we live – the tumult, the quandaries that we’re confronting globally. I wanted that to be reflected in the gardens both in the prism of fiction and non-fiction. I don’t think it’s just non-fiction that’s exploring in concrete ways these ideas, I think they’re being reflected through fiction as well."

Dyer speaks of the empathetic nature of good fiction writing. She cites visiting international authors Mohammed Hanif and Ahmed Saadawi as names to look out for. Then there's the multi-award winning Goorie writer Melissa Lucashenko, whose latest novel Too Much Lip offers a local example of "authors telling us first hand what it’s really like" to live through devastating events in history and the ongoing aftermath, and “what that does to your psyche.

"I think it’s often through the world of fiction that you can best delve into the more subconscious, the more profound, the deeply imaginative," Dyer says. "It’s not attempting to be prescriptive, or analytical, or rigorous in that way. It’s attempting to make an emotional connection, or a spiritual connection, which the best most immersive fiction writers really do and can open up that world in a way that is more effective than non-fiction, which can often be more informative, educative and forensic rather than emotional, immersive and poetic."

Dyer’s advice for anyone heading to Adelaide Writers’ Week for the first time is to think laterally and take chances. She goes back to the free and open nature of the gardens, where there may be "authors that people might not have heard of but that you think have something really significant to say, [or that] are saying things that perhaps haven’t been heard by our audience before, or that haven’t been teamed with other voices in quite the same way as well. That’s the kind of difference that Adelaide Writers’ Week can offer."