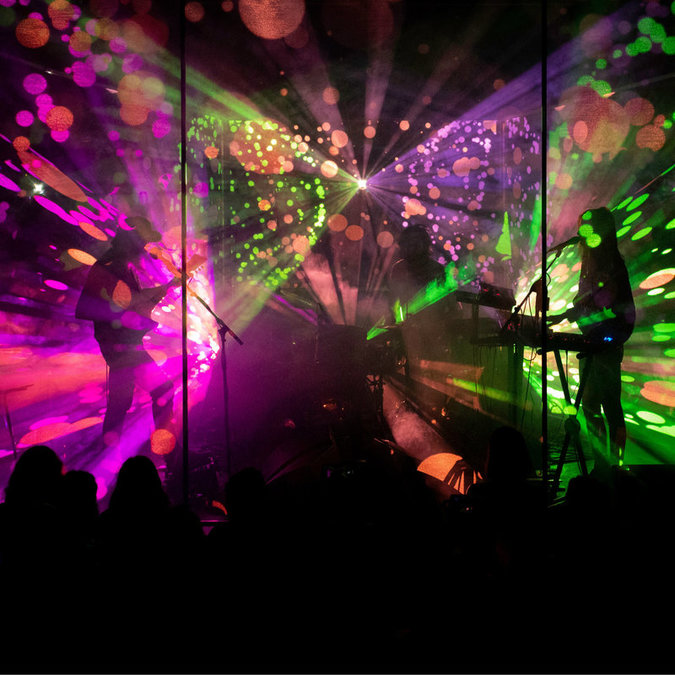 When Moon Duo take the stage, several things are immediately apparent. The duo is a trio for tonight with the addition of a drummer. And, there will not be a lot of audience interaction.

All three musicians are cocooned in a thin screen that surrounds the stage. Within minutes they’ve locked into a hypnotic groove. The drummer’s propulsive motorik rhythm is a constant, and around it eddies of psych guitar lines and stabs of synth surge and crash.

The trucker-capped guitarist Ripley Johnson is almost immobile, and he and keyboard player Sanae Yamada are barely visible among swirling patterns and flurries projected onto the surrounding screens. This visual element nullifies the effect of the tall crowd. It allows the mind to wander as the music explores a comfortable thread of easy listening psych. Placing a projector directly behind the drummer’s hands is a smart move, making it possible to keep the beat with both eye and ear.

The band is mostly visible as negative space on the screens; their performance marked by restraint. There’s no talking between songs and no wasted notes.

Alan Vega’s musical influence is strong. But while he was a born showman, Moon Duo’s cover of Jukebox Babe strips out any of the wild rockabilly elements. Even better are the originals that rid themselves of a hook in favour of minimalist industrial synth-psych. The insistent beat slips from the foreground and buries into the subconscious. These seemingly unrealised ideas continue to appear, forming and reforming themselves in fluid patterns before coalescing into an inevitable, orgiastic climax.