The Pursuit of Happiness

Ahead of his Adelaide Festival performance at The Palais, Perfume Genius tells Fest about trying to feel happiness and rebelling against himself on latest album No Shape 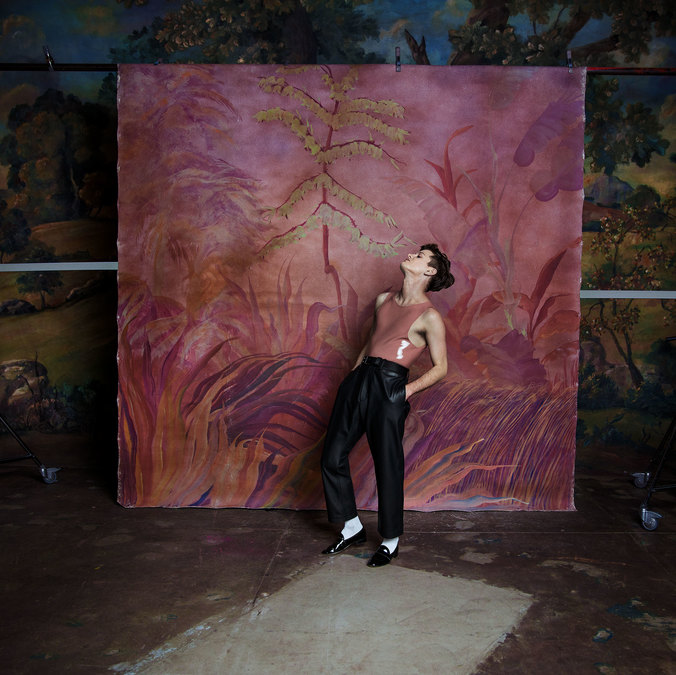 Mike Hadreas, aka Perfume Genius, is known to bare his soul in his music but once a tortured artist has expelled all their demons, can they ever achieve real happiness?

'Let all them voices slip away,' sings Hadreas on Slip Away, the lead single from latest album No Shape. The track is indicative of Hadreas’ new writing style and, seemingly, his current state of mind. “I was writing more in the moment about how I feel or how I wanted to feel, as opposed to going over old stories of things that have already happened to me,” he says.

Hadreas’ first two albums as Perfume Genius, Learning and Put Your Back N 2 It, introduced us to some of his deepest, darkest secrets: battling drug and alcohol addiction, teenage sexual abuse and struggling with his sexuality. But 2014’s Too Bright really felt like Hadreas’ coming out; his departure from lo-fi piano-playing singer-songwriter to fully fledged queer icon.

Hadreas has never shied away from his sexuality and he openly deals with queer issues in his music. “I can't get too mad about constantly talking about my sexuality because if I didn't want to then I probably shouldn't have made three albums about it,” he says. But that’s not to say you must be queer to identify with his music. “Some people think listening to a queer artist means something about their sexuality, and sometimes it does and it can then be a really powerful thing, but you don't have to qualify before you like my music.”

Hadreas’ music is heart-wrenchingly honest, and on each album we’ve listened to him processing different issues in his life – with Too Bright feeling like the moment he finally unleashed all that lingering internal anger. Now that he’s shed that skin, on No Shape he was able to explore more positive themes. “I never really get happy, but I'm really trying to,” he says. “There's a lot of rebelling against my own self and my own brain in some of the songs.”

Despite his previous material dealing with darker issues thematically, there has always been an underlying sense of hope in Hadreas’ writing; a desire to reach the light at the end of the tunnel. With his life in a much less tumultuous state nowadays, he had to make a conscious effort to tackle new ground musically and emotionally for his latest effort and it appears he has finally come to terms with his own contentment.

Hadreas’ boyfriend Alan Wyffels is the somewhat unsung hero of Perfume Genius. The pair first met during a period when Hadreas had relapsed and Wyffels helped him get sober again. They have now been together eight years and live a very normal, peaceful life together in Tacoma, Washington with their dog. But Wyffels is much more than just Hadreas’ muse, if you could even call him that in the first place.

Wyffels, a classically trained musician, has seen Hadreas through every step of the making of his last three albums – every album apart from Learning – and has lent a helping hand on each one along the way. No Shape’s closing track Alan is dedicated to Wyfells. 'Did you notice / We sleep through the night / Did you notice, babe / Everything is alright?' sings Hadreas, the sheer simplicity of his words beautifully highlighting the feeling of comfort and, ultimately, happiness.

Hadreas worked with Dutch photography duo Inez and Vinoodh on the artwork for No Shape, which sees him facing away from the camera looking upon a picturesque landscape. “When we were doing all the pictures, I thought for certain we would use the one that was a more traditional portrait and I even had to fight my label after for this one,” he says. “I felt like it fit with the songs, having this warmer energy but then underneath there's always some discomfort.”

Interestingly, Too Bright is the only Perfume Genius album to use a portrait shot on the artwork, while both Learning and Put Your Back N 2 It used images where faces are masked or covered up in one way or another. “I think for [Too Bright] having that picture felt really rebellious. It felt more defiant to be on the cover of that one, the way that it was,” he says.

There is a sense that Hadreas really does struggle to allow himself to be happy, but it seems that in many ways, he is also his own worst enemy. Although he takes steps towards a more positive, uplifting sound on No Shape, there are still plenty of cracks to be found underneath the surface and those demons appear to still be there, even if they aren’t as obvious as they once were.

Whether Hadreas will ever be able to reach that light at the end of the tunnel is uncertain, but he’ll certainly never stop trying.