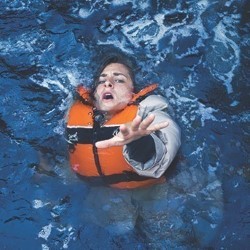 A nameless Syrian graffiti artist (Avital Lvova) is working to bring about the end of the Assad regime. English photojournalist Sebastian Nightingale (Graham O’Mara) has abandoned his ideals in the pursuit of fame and fortune. The lives of these artists follow separate trajectories, but Borders brings their stories together at a sharp intersection, forming a wedge which drives home an intense and emotional conclusion.

Henry Naylor has consistently received well-deserved praise for the quality of writing he has bought to his Arabian Nightmares series, but it is the performances that really make Borders a memorable production. O’Mara puts on a charm offensive as the initially bashful and idealistic photographer who finds a mentor in a jaded yet moralistic reporter. His scenes bring a levity to the proceedings, but also build the ideological framework which the narrative rests upon.

Lvova, meanwhile, offers a commanding and physical performance. She is able to inhabit a host of characters, and bring dreadful life to scenes of violence and terror. But her character, the graffiti artist, feels stencilled-in: literally nameless, characterised by stoicism, motivated by anger, and defined by a single childhood experience. These details only slightly undercut an exceptional performance, however, and do little to rob the show of its dramatic heft.