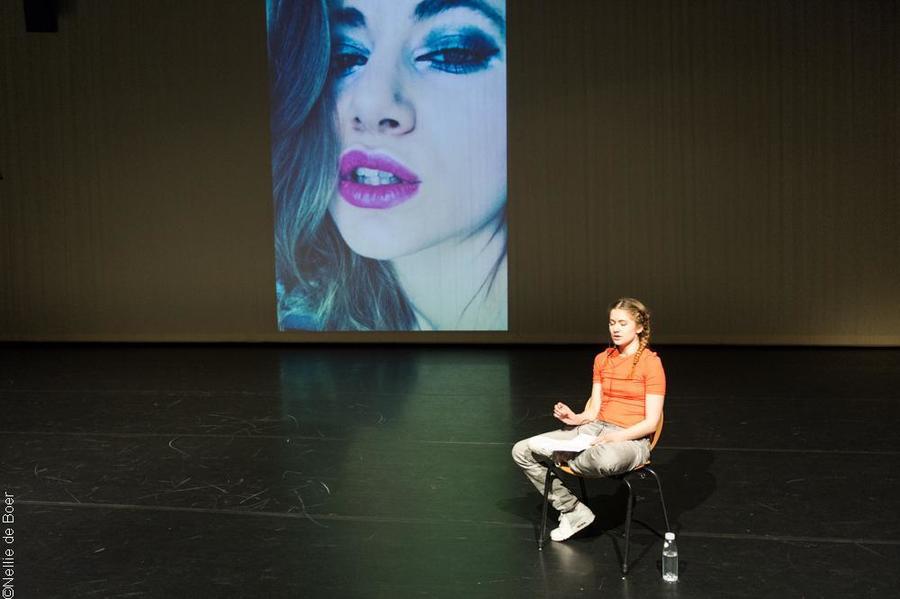 Since its inception, cinema has been monopolised by the male gaze. Deconstructing that now – entirely – seems implausible. And then, there are women whose unapologetic explorations of contemporary culture render the notion of gaze ownership redundant. Samira Elagoz is one of these women.

Six years ago Elagoz was raped by her then boyfriend. This event became a catalyst for a litany of experiments that explored attitudes towards gendered power relations and sexual assault. Attitudes that were embodied by both her close family and friends – and strange men she encountered through online social platforms.

On stage, Elagoz performs and narrates with a reserved precision of emotionless language in succinct and matter-of-fact statements. It is as though she is the lecturer and we are her students. Snapshots of cinéma-vérité documentary-style footage interjects her narration. Earnest but undeniably problematic conversations with family and friends appear first. Then peculiar men pop up, enlarged and neon-bright in the dark room, exhibiting perverted, dominant, vulnerable, obnoxious, laughable, creepy and caring fragments of themselves.

The fearlessness with which Elagoz’s research embraces her curiosity to unbind the blame that often entraps women, instead of their perpetrators, is subversive. To achieve this though, neither we nor the strange men get the oppurtunity to experience the real Samira. Everything is a performance, everything is filmed, everything is within her control. There is one small lapse into the genuine burden she faces but it flashes quickly before being whisked away. Mostly we’re left wondering what role, if any, we’ve played in deconstructing rape culture.