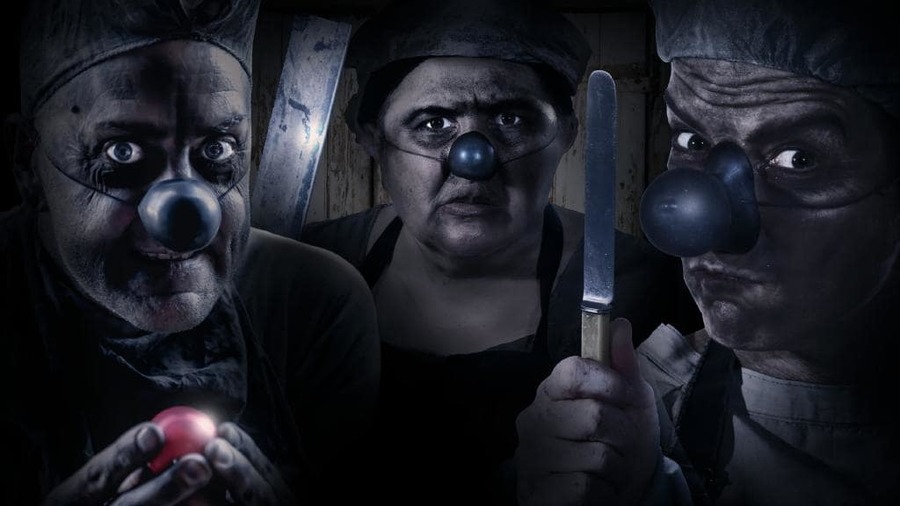 What does it look like when an art form starts to eat itself? Deep in the murky underbelly of clowning dwell the Pigs, an image of decay, desperation and cannibalism. Three black-nosed clowns, dressed in the drab grey of an Orwellian proletariat, sneer and bicker as they hunt down others – the red-nosed, colourful, prototypical clowns of the auguste buffoon – machetes in hand.

Very little is made explicit in The Long Pigs. Living in a dilapidated abattoir, bedecked in stained sheets, rickety contraptions and the remnants of circus props, the cartoonish Pigs seem at first to be harvesting and preparing red noses. They toss them back and forth, running them through their Rube Goldberg-style chutes and pulleys, hungrily tallying their spoils. We see no slaughter first-hand, but the implication is clear. They’ve been on a spree and they’re missing one nose: where is the final clown?

This begins to disrupt their mechanical, repetitive behaviours. Their periodic hallucinations of a bygone life in the circus – bicycle stunts, banana peel pratfalls and water-squirting pranks – become sadder, more combative, less coherent. Is this the fate of malnourished art? Neglected, confused, forced to consume itself? In their hysteria the Pigs even mock religion, in a knowing parody of the crucifixion, and it’s made all the more jarring with clowning motifs worked into their brazen iconoclasm. It’s a thematically meaty piece of physical theatre, where every laugh is undercut by a sense of morbid unease.

With such expressive performers leading the production, The Long Pigs is a gristly, thought-provoking show. Its gruesome conclusion seems to suggest both that there is no place for the classic clown in this modern landscape of underfunded arts, but also that great art can emerge from even the darkest corners of the human condition.