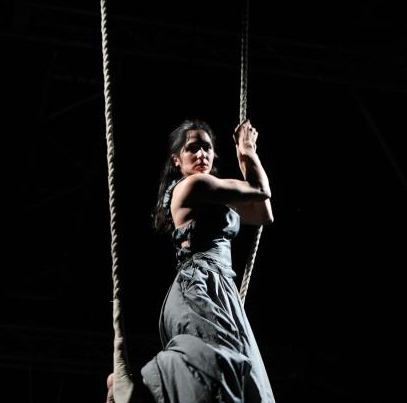 The mission statement of NoFit State Circus is “to be the circus everyone wants to join.” A noble goal, though one which would seem to sit uncomfortably with its latest show tabú's attempts to pose serious theological questions. While the allure the "dark side" holds for humanity is considered throughout the piece, this affects the overall atmosphere more than the specific content. Happily, the show is lent an underlying sense of pathos and fragility, while its focus remains firmly fixed on dizzying spectacle and communal activity.

As the audience enters the facade of a flying saucer situated on some otherwise unused wasteland off Leith Walk, an off-beat, immersing experience is clearly imminent. Once the lights go down, national stereotype characters (whose behaviour irritates as much as it amuses) begin to act as both performers and ushers. The audience is cajoled and directed towards different areas of the tent, as trapeze artists soar overhead and acrobats trampoline in their midst.

The many set-pieces are rigorously choreographed, most possessing a satisfying narrative of their own. One highlight is a performer in platform boots partially stripping and rolling a cigarette while suspended on a tightrope. Though tabú is circus at its most modern and forward-thinking, such risqué innovations are performed so artfully as to assume a sense of timelessness. Clearly enamoured with circus tradition, NoFit even finds room in its repertoire for more traditional capers, when a lady clown inadvertently, and repeatedly, bludgeons her unfortunate colleague's testicles with a hula-hoop. Where do I sign up?