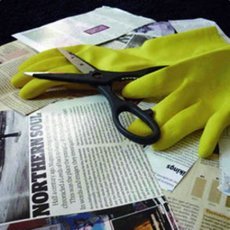 1984, A Brave New World, Bladerunner. Authors and auteurs frequently use a dystopian future to add urgency to their message. Unfortunately, the Freshblood Theatre Society reveal that this is a flimsy allegorical tool when there isn’t an adequate story to back it up.

Troy, a simpleton, lives on the streets of The Cardboard Metropolis collecting and memorising advertisements. He is harassed by a pair of venal advertisers and a banal philosopher. The former are frustrated because he doesn’t buy anything and the latter deplores his obsession with consumerism.

For the most part the script is snappy without being trite, but the production is let down by feeble characterisation. The advertisers are more cardboard than the metropolis. They seem fake, but not in the unlikable real-life way they’re supposed to. This isn't entirely the actors' fault: it must be difficult to inhabit a role that doesn’t go beyond being a stereotypical greedy advertiser. The philosopher, who speaks mainly in truisms, is as unlikable as his foils. Troy is an exception. Actor Fergus Nimmo brings life and charm to the role even though his dialogue consists almost entirely of advertising slogans.

The programme explains that author/director Hannah Tottenham wants to draw our attention to how much advertising we subconsciously absorb everyday. And, unnervingly, Troy’s slogans are all immediately familiar. But pointing out the ubiquity of branding doesn’t seem enough of a justification for this production. Especially when the very same programme is emblazoned with advertisements from the group’s own corporate sponsors.