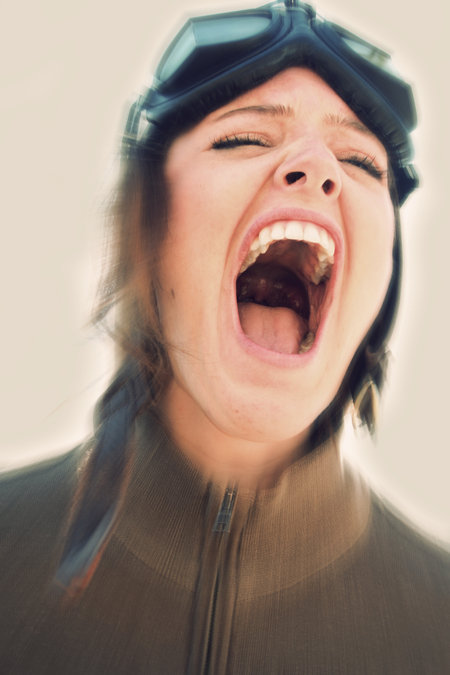 The first half of The Fastest Woman Alive seems simple – a slice of wholesome, believe-in-yourself American pie. The play presents the life of Jackie Cochran, the first woman to fly faster than the speed of sound, beginning with her rise to the top in aircraft apparently fueled solely by self-confidence. Someone even utters the words: “All that matters is not lying to yourself.”

Once Cochran’s predictably bold clashes with various military men are out of the way, the whole production gains in confidence, turning instead into an absorbing study of dreams turned sour as the aging Cochran’s fierce ambition curdles into envy of the younger women who have replaced her.

As Cochran, Lauren Randol certainly seems to relish the shift. From this point on she inhabits her character in a way that simply wasn’t present earlier on, Cochran’s formidable dynamism focused inwards to repress regret and guilt. She also develops a touching semi-maternal connection with a fellow pilot (Zach Sandberg), with subtle emotional cues hinting at something more to the bond.

Despite some promising signs, The Fastest Woman Alive is encumbered with its script, which tends to resemble a cliché-ridden made-for-TV movie. Most of the support cast flit in and out without being given a chance to make much of an impression, while the cast’s background a cappella “aaaah” when anything vaguely mystical happens is more irritating than uplifting. Unable to recover from its dull first 40 minutes, the result is an unsatisfying, deeply flawed piece with glimpses of real potential.