Polly is a walking talking manifesto in drag 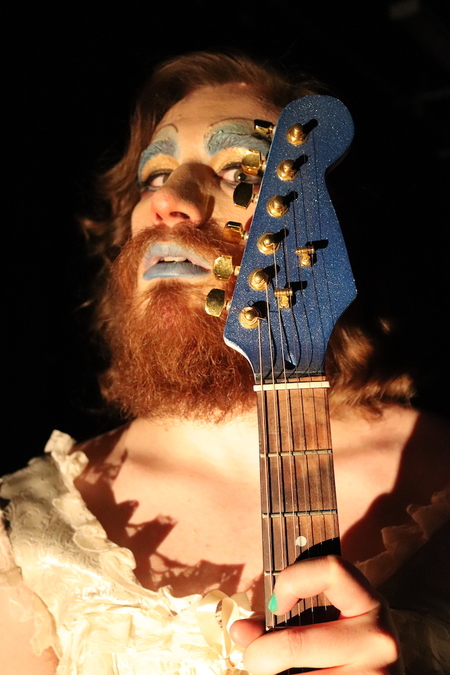 Polly, the drag alter-ego of performer Joe Strickland, doesn't care what you think. She makes no bones about it, in fact they are the first words of the show. Shortly after she crashes into a song on that very topic, like a musical exclamation mark. Full of guitar-backed rallying war cries, Polly: A Drag Rebellion is dominated by DIY punk tunes and grand declarations for change.

A manifesto in drag, Polly explains that she is a cosmic spirit inhabiting the body of Strickland, who she has chosen for his performative background and ability to talk to crowds. She is here to be the antithesis of the far-right. As Polly argues, a political spectrum that includes a far-right must include a far-left as a balance.

Blasting the audience with guitar-fulled revolution, Polly won't be satisfied until all are behind her cause. This is a show that will divide audiences, some applauding Strickland's efforts while others will be baffled by them. Is this a critique of the left? Is it a fair one at that? Strickland has the crowd singing 'Mr Brightside' before any definitive answer is made. In a show about big ideas, very little time is give to conclusions and this may be the biggest frustration for audiences who want more than they are given. Polly: A Drag Rebellion can be unifying at times but come the end, is ultimately unsatisfying.