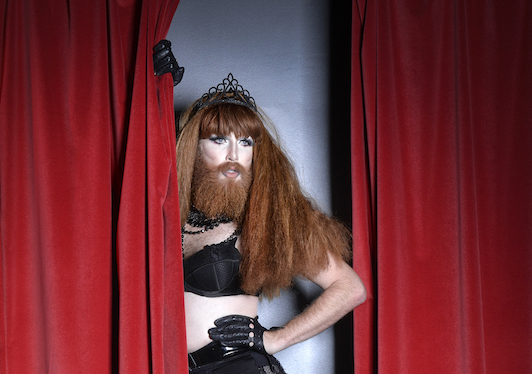 In her first solo show at the Fringe, bearded, seven-foot drag queen Gingzilla sticks her fierce stiletto heels into gender stereotypes and leaves some fabulous wreckage in the wake of her rampage at Assembly Festival Theatre.

The aesthetic is a '50s-style cinema experience, complete with Gingzilla as the least professional usherette ever. What follows is a run of authentic TV ads from that decade on how to be a "glamorous" woman—put up and shut up—with extra Gingzilla inserted. It’s pointed camp, as sharp and fun as the queen herself.

The joy of the show is how it riffs so successfully on classic horror movies, mixing the DNA of films like King Kong with Gingzilla’s lessons from a grandly patronising, disembodied male voice on how to fit in and conform. That goes as well as you’d imagine. It’s the perfect mashup of conquering and cabaret.

When she breaks free, the redhead unleashed, it’s the marginalised ‘monster’ reconfigured into a vampish silhouette, discarding her Amazon Prime chains.

The show’s a little disjointed, but, boy, those seams are rich. Gingzilla’s singing voice is a delirious mix of Shirley Bassey, a trucker and a T. rex. In between unleashing it on her audience, she’s as comically expressive as a silent movie star.

This production mixes film, pop and lip-syncing into a multi-media headrush that creates something new. It’s exhilarating, naughty and nice.