A Bunch of Weirdos 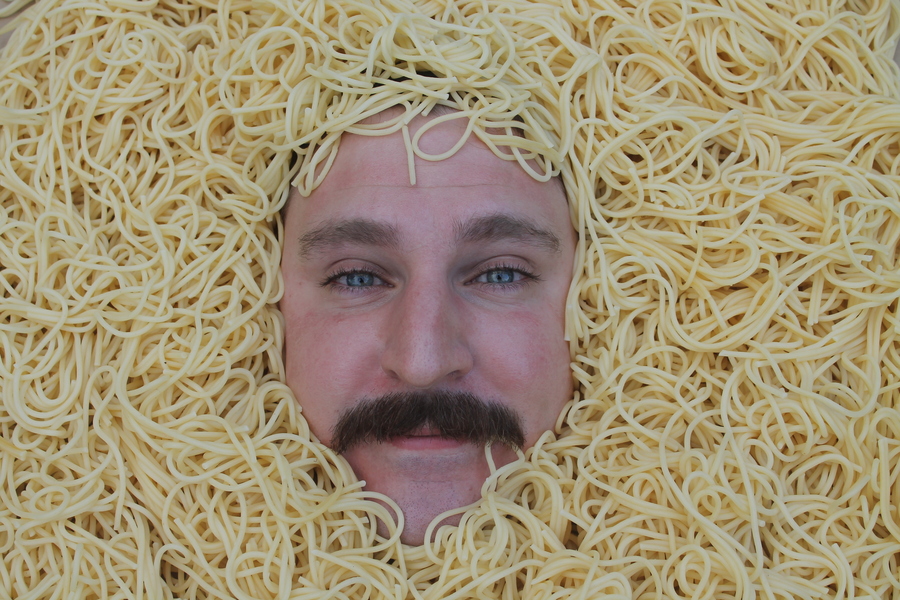 A victory for the little guy. An unprecedented achievement. The sign of a grassroots revolution. However you want to frame it, the story of John Kearns scooping Edinburgh’s best newcomer title in 2013, then the main prize the following year, was remarkable as much for the shows’ Free Fringe DIY ethic as it was for the distinctiveness of their content.

But another part of what made this triumph unusual was that Kearns—who’s decided to sit this festival out—had emerged from a loose collective of comedians whose methods seem utterly, stubbornly divorced from any conventional idea of success. If there’s a careerist among his usual London cohort, it doesn’t shine through on stage.

Character comic Ali Brice, surprisingly placid after a preview of his supremely ridiculous new hour, is recalling the time when, at the 2010 Fringe, his best friend and now director Adam Larter pitched him an idea for a new night.

“I was like ‘All right... but you're not going to call it 'Weirdos', are you?’ He was like, ‘Yep!’, then he painted a bit of cardboard with the word ‘Weirdos’ on it, set up shop in King’s Cross, and the rest is history.”

Larter says he was sick of being the token oddball at open mic nights. He’d found himself looking out at the audience and thinking, “I don't know if you're laughing just because it's different to everything else, or if it's genuinely good." So he assembled a few like-minded absurdists, surrealists, assorted goons and misfits, and gave them a place to indulge their daftest instincts.

According to playwright Jon Brittain, Kearns’s two-time director and friend since their first day at the University of East Anglia, 'Weirdos' gives comics “a space to fail”, to whittle their way down to what will eventually be their style. This, he says, is crucial for any act with aspirations beyond the middle of the road: “What happens to some people is they find themselves being good at one of the first things they try – so they're never forced to go to the thing they're great at.”

Brittain, who calls himself “a peripheral figure” among the ever-growing Weirdos mob, is keen to contrast their ethos with another clique, the Alternative Comedy Memorial Society [ACMS], known for saluting the so-called "noble failures" of its performers.

“ACMS is like ‘do something that isn't stand-up, don't worry if it doesn't go right’,” he says. “But the acts have to be told to do that. In the Weirdos, that is what they do—stuff that is objectively not stand-up—and they do not give a shit if it goes well or not.”

Perhaps that explains the knockabout nature of the jewel in this group’s crown: the annual charity panto. First came Hook, a remake in the loosest sense of the 1991 Spielberg stinker, followed by The Colonel in 2013 (the purported genesis story of KFC, of course). Most recent was a Little Mermaid-mangling effort called A Christmas Tail.

The props are mostly cardboard, the costume choices inexplicable, the cast list ludicrously swollen and the lines barely learnt. Chaos reigns and each of these gang shows glories in its own lack of polish.

Brittain had to contend with this sort of mindset when helping Kearns finesse his two previous shows – 2013’s Sight Gags for Perverts and last year’s Shtick. And Brittain has a busy Fringe ahead this year too. As well as a re-run of Margaret Thatcher Queen of Soho, which he co-wrote with its power-dressed star Matt Tedford (another old uni friend and Weirdos newbie), he is directing stand-up by Tom Allen, James Wilson-Taylor’s superhero tribute Bat-Fan, plus his own play What Would Spock Do?

The latter two, a comedy guide to the caped crusader and the love story of a closet Trekkie, speak to his fascination not only with the two franchises in all their naff splendour, but also with the way fandom becomes a part of one’s identity. Brittain’s in the business of bringing coherence to comedy, and yet he speaks with something like awe about the Weirdos’ nonsense group projects—"They’re so long!”—and he even appeared in their recent Harry Potter pastiche.

What happens, though, when there’s no safety in numbers and it’s up to a solo act to earn the crowd’s indulgence? One of the dozen-plus affiliates grappling with that task this August is Pat Cahill, another of the old UEA contingent, whose Panjandrum is a showcase of "neo music hall" inspired by an old wartime LP. He calls it a “daft one-man Dad’s Army”. Sample song titles? ‘Granny's Gone and Lost Her Fanny’ and ‘Put the Gun Down, You Naughty Boy’. Make no mistake: this will be extremely stupid. But often the appeal of material like this, says Cahill, lies between the lines.

“The thing I like about any absurd stuff is you've got to see the pain and the reality of where it's come from. You know that there's some reason that bloke—or lady—has decided to put that on his head, or to move in that way," he explains. "It's that unsaid ‘there's something going on in there with him’. We're never going to know and we never really want to, we just have to see the end result.”

That was certainly part of what excited critics about Kearns: the undercurrent of real melancholy beneath all the pissing about. Brice and Larter are wary of the suggestion that this might apply to their own work—that it’s anything more or less than silly—and so drown it out by lapsing into squawking impressions of Kearns.

“Samuel Beckett? It’s a wig and teeth, mate,” scoffs Larter. Eventually, they concede that Brice’s centrepiece character, Eric Meat, might have absorbed the “politeness and frustration” of figures from Brice's youth. Still, the aim is to amp up the foolishness to the point that you’ll be laughing too hard to notice.

Different priorities inform Beth Vyse’s As Funny as Cancer, in which real life, unusually for her, will be front and centre. Her style, which she calls “big and grotesque”, developed over three solo hours populated by theatre dahlings and daytime TV hosts. All this began when she left behind a past life as a “proper actor”—Royal Shakespeare Company and all—after discovering a tumour in her breast.

“I kind of went, ‘fuck it, what am I waiting for?’” she says. “I just started developing my own stuff and being braver, taking more risks.” Only now, several years on, is she addressing her cancer directly – taking the high-stakes, prop-strewn absurdism that was inspired by her newfound perspective, and juxtaposing it with cathartic tales of mortal fear, heartbreak and, happily, remission.

Vyse, like her fellow Weirdos, stresses that they’re a stylistically diverse bunch. They range from the low-key (Mark Stephenson) to the truly anarchic (Holly Burn). But what seems to unite them, other than friendship, is a determination to experiment and leave it to the audience to catch up. Brittain says that, for all that Kearns shares this tendency, during those pivotal two years he became like “a runner with his head down”. Could another of this rabble muster that same focus and find themselves with a bonafide hit? As anyone who's witnessed the haphazard mania of a 'Weirdos' gig could tell you, stranger things have happened.