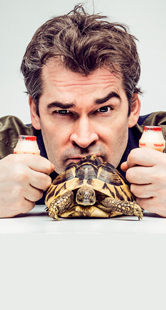 He hands every audience member a Christmas card pre-show (oh, it’s also set at Christmas, which “gets earlier and earlier each year”). All but one of them say you didn’t do it. One of them says you did. And guess which poor sod got that one? Yep, me.

The entire show is basically a series of stupid games set-up to catch the killer, chiefly through an enormous game of Guess Who?, and then through an increasingly odd set of tasks. There's singing, punching fruit, lying on the floor while having food eaten off your prone body. Yep, I had to do all of that.

Riches runs it all in character. He’s Victor Legit, a preposterously pompous investigator who slams down Yakults and forces the whole audience to hand round a spring roll, for no other reason that it’s funny. His improvisation is excellent—and extremely bizarre—throughout.

And it is funny – if you're one of the 99 audience members to get away relatively unscathed. If you’re the unlucky one, you’ll spend the entire time in excruciating anxiety. Certifiably not for the faint-hearted.