Amusical: Not Giving Away Their Shot 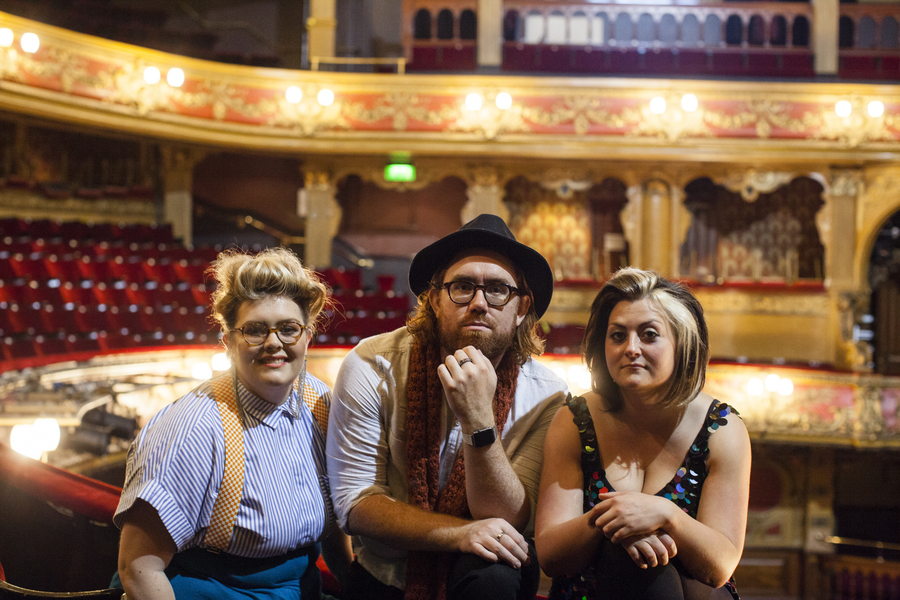 Like most friendships these days, the dynamic behind the trio of Kiri Pritchard-McLean, Jayde Adams and Dave Cribb began with a love of Hamilton. The all-conquering Lin-Manuel Miranda Broadway smash was blaring out of the stereo on a car journey back from a gig in Cardiff and Pritchard-McLean and Cribb were singing along.

"Then we moved onto Les Mis, and then some Disney I think. Anyway, we realised we both loved musicals, and we quickly reeled off a list of loads of other comedians we knew who also did," remembers Cribb.

"Secretly." Pritchard-McLean interjects. "And wouldn’t it be great if they had a chance to fulfill their dreams?"

"The first name that sprang to both our minds was Jayde [Adams] for obvious reasons, so we got her on board to host with Kiri," Cribb says. "You can’t have a camp, feelgood musical extravaganza full of costume changes without Jayde Adams," adds Pritchard-McLean.

They took this new show idea to the Best Newcomer nominee, who also happens to own the best set of pipes on the comedy circuit. Adams was a little skeptical at first but was soon convinced. "I'll be honest, I didn't know what was going to happen but I tend to say 'yes' to most things, and from the off, it's been magic!"

Amusical had been running at the Backyard Comedy Club in East London before its first outing at the Fringe last year. Cribb remembers it fondly: "If you’d have come last year you’d have seen Aisling Bea in full lederhosen; a rendition of 'Cell Block Tango' [from Chicago] by the likes of Sara Pascoe and Ellie Taylor; with some superb acting by James Acaster; and Edinburgh Comedy Award-winner Richard Gadd duetting with Michelle McManus."

When it comes to comedians stepping outside their comfort zones, Amusical is doing something a little different from that other Fringe favourite The Wrestling. Though Max and Ivan’s uproarious mash up of WWE and standup is quite the spectacle, it's also inextricably tied to the toxic masculinity inherent in the brutal ballet of professional wrestling. Amusical on the other hand gives comedians a relative safe space (little to no elbow dropping here) to do something they’ve always wanted to, with Pritchard-McLean and Adams alongside as pushy theatre mums offering strong words of encouragement and, in Jayde’s case, some delightful, homemade musical-inspired costumes.

Though the idea of comedians singing their favourite tunes from their favourite musicals may sound like a disaster waiting to happen, Cribb, Pritchard-McLean and Adams have all been impressed, not only with the enthusiasm that various comics have brought to the show but also their abilities. But who’s been the best?

"Hmm, I reckon Nish [Kumar]? The lad really has a set of pipes on him!" proffers Pritchard-McLean. Adams meanwhile has a list as long as your arm: "Spencer Jones is just 'wow' with his Fagan, The Birthday Girls have a choreographer and are incredible, Alfie Brown has an amazing belt, Zoe Lyons absolutely stormed it, and London Hughes stole the whole show."

Alongside the aural delights, Amusical is at heart funny people singing their favourite songs, and as such, there's a lot of fun to be had. As Cribb (band leader of Dave Cribb and the Quavers) recalls, "Josie Long did a rendition of the '[Tonight] Quintet' from West Side Story where she played all the parts, which had me crying with laughter. It was almost impossible to keep up as a band but it was one of the funniest things I’ve ever seen."

They’re keeping tight-lipped about who might be performing at this year’s gala show at The Grand, and the trio are convinced that it’s not just comedians who secretly love musicals. "Everyone has a favourite musical, even if you hate musicals," says Adams. "There will always be one you don't hate!" Pritchard-McLean chimes in, channeling her role as co-host of the All Killa No Filla podcast: "Yeah, it’s like serial killers. Everyone’s got a fave even if they’re not that into them generally."

For Cribb, it's not the musicals per se, but the communal spirit of Amusical that wins people over: "It’s right at the end of the festival for the performers, so it ends up feeling like a big school play where everyone’s really trying their hardest and blowing off steam."