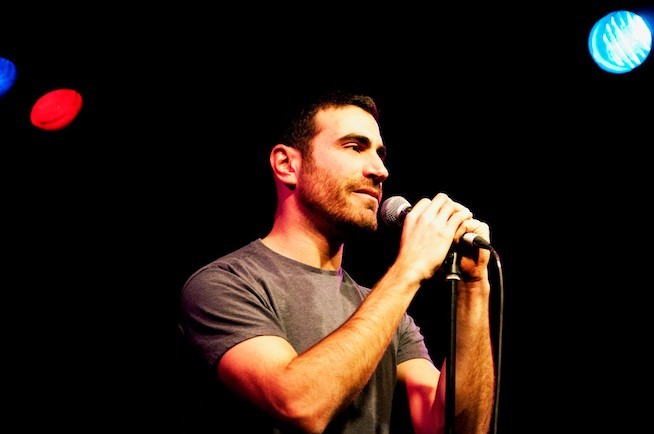 What I would give to sit in shows next to a Freudian analyst with a particular interest in the semiotics of knob gags. I’m sure he or she would write “obsessed with his penis” in about, oh, just about every single Fringe show written by blokes of a certain age I’ve seen this year.

Goldstein thought his girlfriend, whose sexual tastes were far more adventurous than his own, was the one. But of course she wasn’t – what kind of show would that be? Doomed love is far more interesting than roses around the door. He is unflinching in his examination of his own flaws – and his observational comedy about a visit to an STI clinic and what his love of surgically enhanced breasts says about him is no exception. Goldstein has crafted a thoughtful, deeply personal hour with lots of big laughs, and it flies by.

Almost equally obsessed with his penis and also talking about lost love is Nick Dixon, who in Marriage Material (2 stars) tells us about his long-distance relationship with an actor/comedian based in Los Angeles. The couple got engaged within weeks of meeting, and Dixon, a chatty and smiley comic, talks about the joys of making a home together. He could hardly invite her to live in his studio apartment in London—his “wank box”, as he calls it—so they had to search for something rather beyond his means. But the strains began to show as he worked all hours to pay the mortgage, while she sorted out her visa problems. Then a shocking piece of news turns this story in another direction, but way too many questions are left hanging. It’s an unsatisfying end – much like the relationship Dixon describes.

Knob gags also rear their head in Josh Howie’s Read My Lips (2 stars), in which he talks about his upbringing in New Zealand with Scientologist parents and a racist Jewish grandmother, moving to London nine years ago and meeting an Italian guy. What follows is so-so material about his marrying his husband, the highlight of which appears to have been gaining his force-feeding Italian mother-in-law. Howie says at one point: “At least I’m not another straight middle-class white guy up here talking about being awkward.” Which is of course true, but the only word that needs to be changed in that sentence is “straight” for “gay”.

You would think his background and life experience would throw up some comedy nuggets but there isn’t an hour’s material here, and Howie doesn’t convert his better stories into showstopper gags. And you really can’t do stuff about being body positive while accusing the blokes in the front row of having small dicks. That’s a shame as Howie is clearly a nice bloke, and if stars were given for likeability he would get five.

A relationship of another kind—between mother and child—forms the basis of Beth Vyse’s magnificent, madcap hour, The Hand That Rocked the Cradle (4 stars). She is in character as Olive Hands, a washed-up daytime TV presenter who needs a brilliant idea for a new show. Why not a mother-and-baby show? So The Hand That Rocked the Cradle is born, and we are the studio audience as the cameras start rolling. The baby—Tiny Hands—is Vyse’s own son, a cutie who goos and gurgles on cue whenever he is brought on stage. I’m still a little conflicted about this, but he appears unfazed by it all.

The show is, no surprise, a disaster as Paddy McGuinness, whom Vyse realises with a mask with an ultra-high forehead and a stream of Bolton-accented catchphrases, has for some reason transported Hands’ celebrity guests to the wrong place. So she has to fashion them from the audience, or pretend to be them: step forward singer Jane McDonald and “poo expert” Gillian McKeith. The latter intuits Tiny Hands’ thoughts from his nappies in a hilarious scene that’s not for those with a queasy stomach. Z-list celebrities and daytime television are easy targets but Vyse manages to draw out some original material from them, and her audience work is terrific – not many comics could persuade grown men to do some of the things that she demands of them onstage.

It’s daft and silly and a riotous mess, but the underlying narrative—about a mother’s guilt over just about everything—is subtly segued into the action. Huge fun, and done with a big heart.