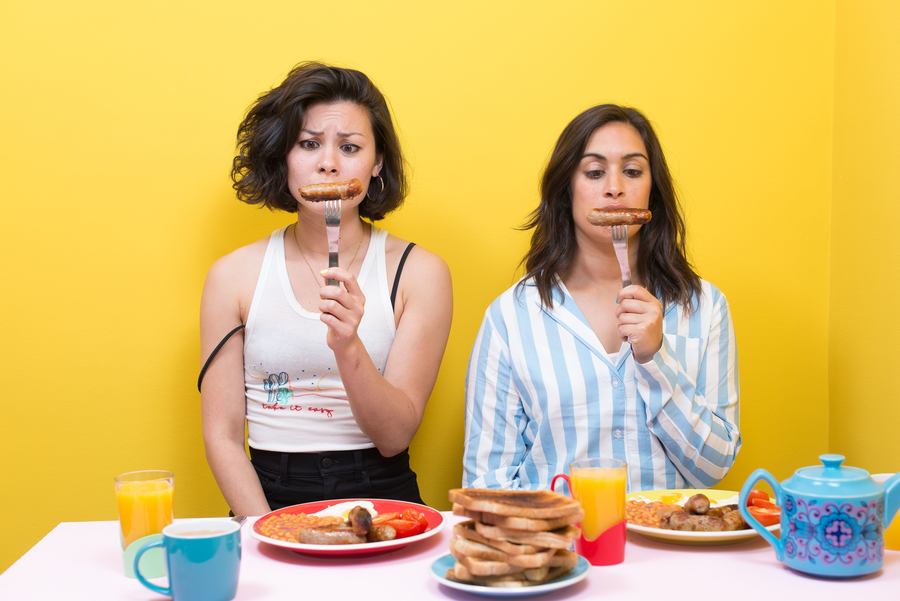 Midway through the Fringe, and there's buzz in the air. First up is Jordan Brookes, who cruises into this particular frame on the back of an Edinburgh Comedy Award nomination last year, and a new show in which he boldly stakes his claim to being "the riskiest comedian in the business". In truth, he's not far wrong. Bleed (3 stars) is an eyeball-deep, fully committed attempt to break the contract a comic has with an audience. They perform, we watch; so goes the familiar formulation. But Brookes is having none of that. Bleed dances around a central question: who is responsible for the impact of a joke he once told? Is it him for telling it? Or is he blameless, and it's us who drove him to seek material which "resonates" with us? In exploring this he literally climbs into our heads, deploying a neat bit of technical wizardry which will have ASMR fans melting.

Brookes is going for broke, and in so doing he breaks open the toolbox, whipping out every alienating comedy device he can. There's gags pushed way past the point of enjoyment; there's grotesque physical comedy; there's stories, one-liners and visual jokes; he manipuates what's real and what's not, and reflexively draws attention to it. He's aiming for a Marmite show and, one senses, the walkout he aims for and scores isn't unique to tonight's performance.

The result, though, is a prodigious, ferocious spurt of creativity that needs reigning in. A good example is Brookes's nasty streak, which he uses too liberally, hectoring one too many people a little too fiercely. Absolutely, Bleed needs menace to work, but all we need is a flash of teeth to know they are there – not a full chewing.

Compare this to Sean Morley, whose show treads similar ground in I Apologise For My Recent Behaviour (3 stars), but with a lighter touch. Morley's focus is on who is responsible for the success or otherwise of the gig. That sounds a bit dense and, sure enough, there's a middle section in which it does drag into particularly testing territory. But it's otherwise consistently funny and, by the end, it's clear that Morley has everything under control. Routines about his arrival, about crisps, about revolting soup, all line up in the service of a central idea. He is—and this is meant in the best possible way—utterly manipulative. There's few performers who could have the audience chanting "we love you" by the end. And really meaning it. He's an understated, weird, brilliant man.

Laura Davis goes bigger still with a show—Ghost Machine (4 stars)—that tackles existential crisis, the transitoriness of the very matter that makes us, and questions why, in light of that, we choose to continue living. Unusually, she mostly does this dressed as a ghost. "People are more likely to turn out to hear the opinions of a ghost than a women," she notes. It's a great conceit, and one that enables her to occupy a space that is both disembodied and decontextualised, as well as constrained and imprisoned (in a sheet). What's extraordinary is the comedy she's able to wring from these grand topics without the aid and connection of facial expressions.

It's a beautiful, expressive show and one that approaches comedy not from the everyday confusion of the observational comic, but from befuddlement at the very nature of existence. At times the tone is unwaveringly declamatory, and the theatrical touches with torches feel disconnected. But as she moves from exposition to conversation with the audience, she makes connections that are sometimes heartbreaking, sometimes inspiring.

"This is a breakup show," announces Sam Campbell, intriguingly. "I've become totally divorced from reality." He's not wrong, either. In particular, he's completely divorced from the generally agreed structure of a joke. There are some jokes in here, but they are generally the weakest bits. Instead, The Trough (4 stars) comprises of a series of visual oddities, u-turns, noises, and tight corners (which Campbell somehow manages to get out of). If that sounds like performance art, then that's a trap. "I really think of this show as a spiritual sequel to [Hannah Gadsby's show] Nanette," he says, wrong-footing anyone who thinks he has a message to deliver.

There are bits that don't work, but it's all carried off with such extraordinary energy that any cracks truly are papered over. There's one point in which we're allowed a moment to breathe... and that's to worship pictures of apes.

It's sketch duo EGG, though, who roll out of relative obscurity and, one hopes, towards greater public attention. Richard Pictures (4 stars), from Anna Leong-Brophy and Emily Lloyd-Saini, members of improv troupe BattleActs!, is an absolute blast. "Just another multi-ethnic female sketch group," they moan at the start.

Within the limitations of sketch comedy, EGG package up key truths about the experience of being a woman, and do so extremely well. What's most attractive is the way they frame the sketches, with short segments in which they goad, cajole and—almost—gaslight each other. They deliver contradictory punchlines. They draw diametrically opposed conclusions from the same skit, a technique used delightfully to guy some of the ludicrous positions taken by men's rights activists and their oafish allies.

As performers, too, they are something else. Utterly on the same wavelength, their chemistry is potent; they step on each other's punchlines and step into each other's personal space; they pack an excellent repertoire of accents; they aren't beneath a solid dad joke (or, rather, mum joke?). This is a perfect, nutritious little package containing a yolk of this year's hot topics.