To fans, he's a true iconoclast. To promoters, a liability. Absent since the mid-90s, the virulent Ian Cognito once again marches on Edinburgh – and as Jay Richardson learns, he's got some scores to settle 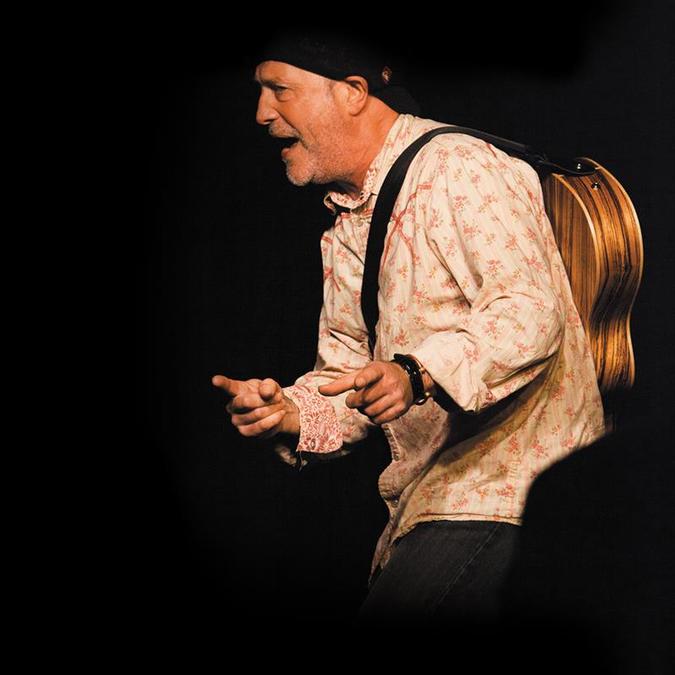 “There's no doubt I'm one of the best comedians this country's got, and I don't get the recognition I deserve,” Ian Cognito growls. “It's the comedy business's loss. They don't want to admit this geezer exists, under the radar or playing the game differently to everyone else. And I have to believe that, otherwise I'd fucking top meself.”

Cognito is championed by comedy's cognoscenti as the most ferociously brilliant, self-destructive, self-pitying standup never to get a chance to disgrace himself on television. The combustible cockney literally wrote the book on pissing away your talent and pissing off an entire industry.

He originally published his compelling memoir A Comedian’s Tale via his website in 1995, the same year that the 54-year-old infamously made his last appearance at the Fringe — it ended when his drunken abuse of comic Ricky Grover's wife in the Gilded Balloon led to the hulking ex-boxer punching him out and Cognito schlepping back to London.

“He laughed ...” Cognito recalls. “Maybe he had a bigger cock than me, but that wasn’t the premise we were working on.”

Becoming a standup in 1985, he quickly fell out with the Jongleurs chain and London's Comedy Store, after relaying to management precisely what he thought of them. He's still banned from, or at least persona non grata at, more comedy clubs than any other headliner. His view of the current booking system is: “There's a lot of begging to be done and to be quite honest, I wouldn't be Ian Cognito if I did too much crawling up people's arses. So that's why I've got a pretty empty diary for the next six months.”

Having spent the morning putting his dismantled ukulele back together, he explains that he'd rather not be back in Edinburgh, notwithstanding “laying some ghosts to rest and laying some non-ghosts too."

“But if I let this fucking business keep ignoring me, that's exactly what it's going to do. And if the mountain won't come to Mohammed, then we shall kill the fucking mountain!”

He intends for his memoir, which he's finally printing and publishing as an e-book for the first time, to be part of a trilogy chronicling his arrests, his breakdown circa 2000—“I actually remember gigging in 2000, so I must have flipped out before that”—and life on the road. “I've got some funny old fucking stories, I've had experiences with people you wouldn't believe but I'll try not to grass anyone up.”

In a new preface he writes: “I considered killing off Ian Cognito after several near death experiences, and I'm not talking about stage dying. Trouble is, I quite like him. He's interesting, honest, ornery and unusual.” In Edinburgh, he “left behind several grand and a polished bit of floor in the bar of the Gilded Balloon, and exchanged this for the solemn promise never to return. But I'm back and this time I'm angry.”

Returning as part of the Free Fringe—“busking it, don't forget to put some money in the bucket”—his show is simply titled Trouble With Comedy. In part, this reflects disappointment with his 28-year career. But it also refers to standup generally, its commercialism, caution and thrall to television's obsession with demographics. “Personally, I would have thought an older person has more to say than a younger one, but we're living with a cult of youth, aren't we?” he says.

Cognito admits he struggles to watch DVDs by Rhod Gilbert and Tim Minchin and at one point barks out: “Fuck Alexei Sayle! I just read his book, it's bollocks, boring”. Belittling Russell Brand for his supposed daring and cancelled Middle East shows—“I like to think I was one of the first to have a pop at Islam”—he bitterly reflects that he couldn't get anyone famous to pen the book's introduction.

“Your Brands, Baileys, Locks and Davis's's [sic] have all moved on, changed their phone numbers and frankly, I think they find me to be an embarrassment. Well, fuck 'em. I'm still here. As schizophrenic and fucked up as ever.”

He's also suspicious about the UK's influx of Canadian standups: “I think they've dug a fucking tunnel from Vancouver.”

He retains an uneasy regard for Jerry Sadowitz as a kindred spirit of anti-political-correctness, notwithstanding the Glaswegian's accusations of him copying his style. “I told him, I didn't see you for the first two years of my career and I'd already begun to burn bridges...” And he fantasies about “taking on” Michael McIntyre in a standup contest. “I'd blow him off the stage,” he maintains matter-of-factly, before lamenting that “they'd never allow us in the same room now.”

Although it's by no means a given that he'll complete his festival run, newcomers seeking something distinct from television's familiar faces will discover that on his night, no-one holds a candle to Cognito's scorching gags, rants, songs and audience intimidation.

“The stage is my natural habitat,” he enthuses. “I like people laughing and being able to have a go at the biggest bloke in the room without him punching my lights out.”

His son is currently shooting a concert film of him and he's almost finished writing the trilogy's second instalment. The Re-Cognition starts here. Signing off, he chuckles: “Don't make me look too much of a cunt will ya? Because I can do that on my own!”