John-Luke Roberts: Look on My Works, Ye Mighty, and Despair! (All in Caps) 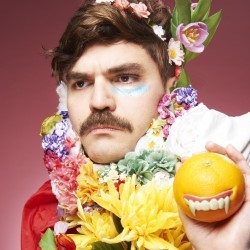 If there’s one thing that comedians across the globe can agree on, it’s that “where do you get your ideas from?” is the world’s worst, most widely-asked interview question. Something along those lines springs awkwardly to mind fairly regularly during John-Luke Roberts’ new offering, though, as you’d love to take a good poke around his show-producing mind palace. Or perhaps not: that might be a maze from which no mortal man can ever escape.

Co-founder of the anarchic Alternative Comedy Memorial Society, Roberts has made a foray into more accessible territory here, although the central conceit is that the moustachioed comic hosts the whole show as a certain 14th century poet. Thankfully this is a lot less pretentious than it sounds, as embodying this particular poet allows you to magnificently mangle the English language without any of that laughing-at-foreigners business.

As he admits, it’s basically a highbrow version of the fake French policeman from the old sitcom Allo Allo, but with an impressive commitment to those archaic vowel sounds, even during the ad-libs.

Elsewhere there are regular moments of sublime prop-based silliness, notably a running beard gag that’s probably a profound musing on mortality too, the return of last year’s death-foreseeing vampire (“You… will run with scissors!”), and a marvellous sequence involving his chosen offstage stooge, a tiny globe and a desperate bid for significance.

That sets up the big finish, and if you see a better bit of audience participation at this year’s fringe than this Spartacus-like affair, then congratulations, that must have been pretty special.