Lock up your dads 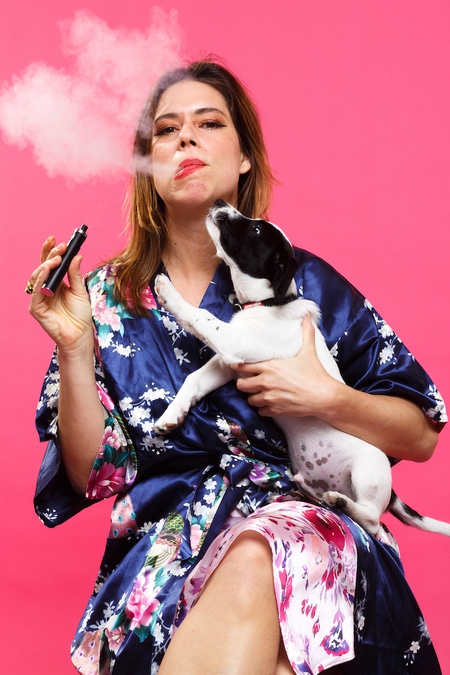 Surfing a handy wave of recent TV exposure, Lou Sanders lands back in Edinburgh as something of a Fringe stateswoman, with a solid batch of shows under her belt. She's perhaps not a matriarch, though. Are step-matriarchs a thing?

That show title is chiefly due to Sanders’ love—particularly on social media—of sexy dad jokes – or rather, sexy jokes about your unsexy dad, and a couple of juicy examples set this show’s bar early doors. Anyone who discovered this reformed absurdist via a TV show such as Taskmaster might be taken aback by the sheer scale of her oversharing. She’s almost like those ‘80s primetime comics, who’d then do a bit of blue in the clubs, but a patriarchy-poking 2019 version.

Then again, any fans of the recent live shows might worry whether Sanders has anything left to give. Let those fears be allayed: she remains absolutely awash with jaw-dropping anecdotes, even after a chap-free year due to the advice of her WhatsApp-based spiritual healer. There are teenage antics, massages-with-benefits, and when all else fails, wildly inappropriate dreams.

These are no idle or compulsive boasts, though. There’s a sharp undercurrent of social comment to Sanders’ shows nowadays, while joking candidly about rarely-discussed body stuff can make a useful difference: as she recently discovered, going public about your private parts is a big deal when there are young women considering potentially harmful procedures due to porn-fed paranoia. Comedy reaches places that other outlets rarely reach, and Sanders is a fearless pioneer. All power to her elbow.