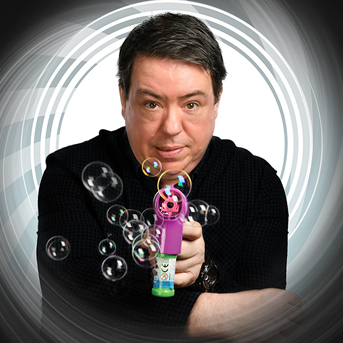 It's hard not to like Matt Price. He's warm, engaging and seems to be a genuinely lovely man. He's also quite well connected in the world of organised crime and has the means to exact revenge on anyone with the audacity to criticise his Fringe show...

Regrettably, one can't ignore the structural problems that blight Broken Hooters and Geezers With Shooters. In summary, Price has neglected to provide the audience with sufficient context as he embarks on a fragmented, non-linear narrative spanning a decade and multiple time zones.

We can say with certainty that his partner was once violently attacked, and that at some point subsequent to this, he was asked to ghost-write a book for a retired Glaswegian crime boss. Understandably, details relating to both pieces of information are kept light. What's clear is that the latter has repeatedly offered to help Price avenge the assault, and that our hero is proud not to have succumbed to this tempting endorsement of violence.

This revelation serves as the show's denouement. Before we reach it, we are treated to a series of vignettes, portraits of the bizarre characters Price has met through the crime boss and descriptions of the unlikely situations in which he's found himself. Men with names such as Stab Vest Steve feature heavily.

Whether finding himself a reluctant guest at a gangland sex party, or forced to devise a hasty escape strategy from a Turkish comedy club, Price relays each tale with conviction and self-effacing charm. But it gets exhausting being served gangland story after gangland story without a sense of progression, sequencing or momentum.