Improvised rapping that dazzles – up to a point 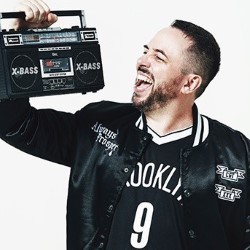 Rob Broderick is immensely talented, as anyone who's seen him strut his lyrical stuff will attest. Under the stage name of Abandoman (which usually also comprises his partner in rhyme, Sam Wilson) the Irish comedy rapper has been dropping improvised bars for years now, transcending genres and the human capacity for speed of thought along the way. It's a shame, then, that Pirate Radio never strays far from his comfort zone.

He's undeniably a crowd-pleaser, structuring every segment of the show around audience suggestions and/or participation. His knack for wrangling the weirdest of ideas put forward into a tight verse is impressive, although understandably he can only riff on the hand he's dealt, and therein lies the inherent risk of ad lib comedy.

The whooping and cheering makes for an energetic affair, well-suited to a weekend outing. What's frustrating is that it feels like he's playing the whole thing far too safe. He's at ease turning "John from Chester" into a verse about "Uncle Fester" but when the move is repeated ad infinitum, it starts to wear thin. Regardless, they're some laurels worth resting on.

He's a charismatic host and an excellent MC, which works perfectly if you're looking for an evening of pure showmanship. Those looking for his lightning-quick mind to be deployed in service of something more, though, may be left wanting. He's not a one-trick pony, but the stable should definitely consider investing in some other attractions.