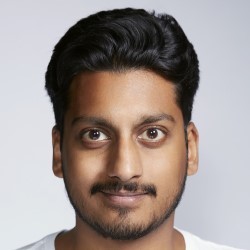 It's tricky to recall a more in-demand comic at the Free Fringe than Ahir Shah. Queues for Duffer can top 40 minutes of waiting, a level of hype more than justified by his hitherto stellar shows (the most recent of which bagged him an Edinburgh Comedy Awards nomination last year). It's a shame, then, that this year's offering isn't quite the knockout hour we'd come to expect.

Shah is at his devastating best when he charges head on at Western society's many hypocrisies, armed with righteous ire and incisive wit. We get glimpses of that here, as well as the bonus of a consistently funny 'Bohemian Rhapsody' callback joke.

He remains angry. He remains well-informed. His status as a festival must-see won't go away any time soon either. But what's been lost in the comedic red mist he crafts so well is the sense of structure, the sense of building to something more than just a series of rants. Here he treads his familiar stomping grounds of race, politics and religion once more, but without much else than a sentimental ode to his late grandmother to weave it all together.

His eloquent tirades work best when they're in service of a wider message. Here, they're deployed (manufactured, even) for claps, more than laughs. And it speaks volumes of his talent that he still gets both with ease regardless.