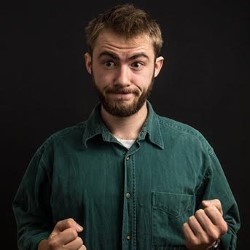 Ben Pope is a nice guy. Maybe too nice for his own good. His debut hour, Baby Sasquatch, is a perfectly pleasant, occasionally milquetoast exercise in finding your comic voice. His isn't particularly distinct yet, but he has all the tools he needs to carve out his niche once he pins it down.

He fits the mould of what we're told to expect from standups: straight white dude in a scruffy t-shirt, telling zany tales of his ill-fated encounters with the outside world. There's a charm to Pope, though, that could allow him to transcend this archetype if he wants to. He's endearing, sympathetic and, most importantly, genuine in all the ways these sorts of comedians usually aren't.

His hapless adventures feature an overwhelming surplus of milk, a bag of sausages and a camping trip to Norway. It's gentle stuff, not entirely devoid of risk but not exactly Charlie Hebdo either. His affability sells it though, and his proclivity for an imaginative metaphor keeps things ticking over.

He has a tendency to find a receptive corner of the room and direct his punchlines mostly to that safe and giggly space, which means he loses out on the opportunity to engage his crowd fully, but he can't please everyone. Indeed, his material would reach another level were it fine-tuned rather than pitched at a broad middle ground. It's a very promising first outing regardless, and an excellent platform to build on as he surely becomes a more prominent name on the circuit.