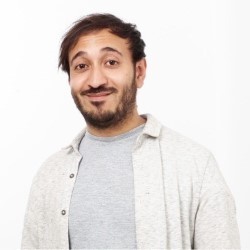 Conventional wisdom would suggest that sometimes you have to fight fire with fire. Bilal Zafar hopes to prove with Lovebots that you can fight it with compassion, too. The hour comprises his attempts to skewer online troll culture by fighting back with some good-natured—and automated—trolling of his own.

The titular creations are the work of Zafar and his tech-savvy friend. They devised a series of Twitter bots primed to respond to any tweet that contained a right-wing buzzword (feminazi, cuck etc) with a message of love and positivity. It's a cheeky gambit and one that pays off – for a while. Eventually the rather formulaic structure of screenshots on a PowerPoint starts to run out of mileage. It's an excellent plug for his own Twitter account, but there's only so many pictures of tweets a punter can laugh along with before it becomes predictable.

He's actually at his funniest when he strays from the visual script and just riffs, with his sassy nonchalance and unwavering deadpan. He notes that his new glasses make him resemble an academic (and bemoans the presumption of knowledge that comes with this), which is fitting given the professorial style that's evoked by his screen pointing.

It's a format reprised from his previous shows, Cakes and Biscuits, and fans of these looking for more of the same will be satisfied. But those hoping for something new might be left wanting. He's witty in his own right, though, and who can fault a man who would go to these lengths just to spread a bit of love?