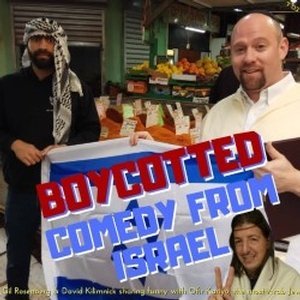 A showcase of Israeli stand-ups that largely eschews Middle Eastern politics, this is nevertheless an offensively bad show. “Boycotted” suggests that it merits sufficient interest to be suppressed, when it doesn't come close to warranting such attention.

Opening, Arab Jew Ofir Kariyo is just off reserve duty in Israel's armed forces where his Turkish-Yemeni heritage set him apart from his fellow conscripts. But it inspires only the broadest, clumsiest strokes of comedy about prejudice against the swarthier gentleman – prejudice which he promotes himself with a dreadful routine about his body hair. Condescending to both the Scots and the English in the room, trading in the hoariest stereotypes, he at least acknowledges the fraught situation in Israel with a few weak gags. And he tries to gee the crowd into enthusiasm.

By contrast, self-styled “Jerusalem nerd” Gil Rosenberg speaks a strangled form of English and cuts a pitiful figure, declaring that he's not a stand up then emphatically proving it. Offering a deliberately terrible song on recorder and triangle, he recounts with zero irony how he tried to chat up a pretty woman by chatting to her “ugly” friend and seems genuinely surprised by his rejection. Inevitable walkouts.

Closing, American immigrant David Kilimnick speaks fondly of his adopted home and the freedom it affords him to be Jewish. But although he built a reasonably amusing head of steam towards the end by emphasising emotive Israeli greetings, he began with belligerence towards the unresponsive crowd and allowed this bitterness to colour every routine.