A love-letter to wrestling that revels in its niche appeal 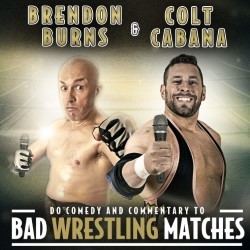 Bounding into view to a chorus of vocal blokey enthusiasm, and sporting a newly-shaved head that turns him into a cross between Charles Bronson and the Tasmanian Devil, Brendan Burns makes his presence known from the off. He's joined on stage by wrestler Colt Cobana, as they endeavour to do exactly what the show's title would suggest.

The premise is simple: after a bit of macho argy-bargy to set the mood, and having introduced a guest "pundit", the duo pull up some vintage (and downright weird) clips of pro wrestling on a big screen and rip them to shreds like a couple of mates doing a drunken DVD commentary track.

They explain for the benefit of any bewildered outsiders that the format started as a prank six years ago, but has been kept alive by sheer demand from loyal regulars. Indeed, to non-Wrestling fans (nevermind those unfamiliar with the show itself) it does feel as though there's a big in-joke that you're not part of. It's as barmy and insular as the fictional world of WWE itself, with our hosts delighting in their juvenile obsessions and the frenzied crowd along with them.

Even if it does have a limited appeal outside its core group of fanboys, though, who are we to take it away from them? It's a different show every night, so repeat-attendees are rewarded for their devotion, and the slapstick humour is universal enough that you can still get a kick out of the videos if you've never heard of an RKO in your life.