Review: David Correos: Better Than I Was The Last Time

David Correos should not be trusted with knives 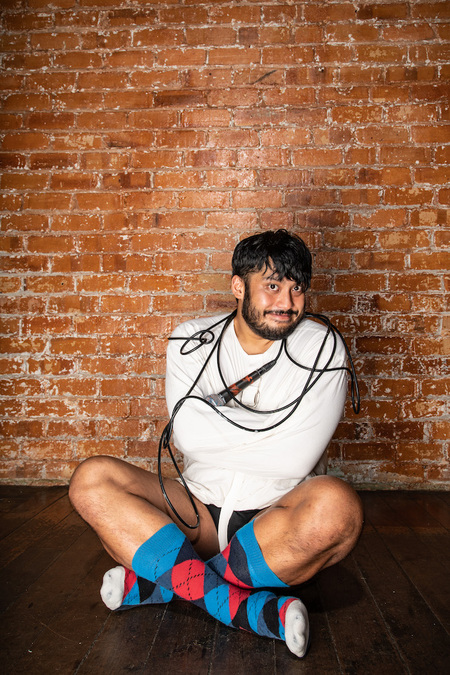 David Correos should not be trusted with knives. After downing half a pint of red wine at the top of the show, little goes to plan. Logic is thrown aside with an unused chicken prop, as Correos sellotapes a bread knife to his face and stumbles around the stage yelling through the pain. This is not unlike watching a breakdown.

Better Than I Was The Last Time falls severely in the shadow of his previous show, The Correos Effect, in which the New Zealand comedian ramped up the energy from one to 10 over the course of the hour, resulting in a bike-pump-butt-plug trick that left audience members gagging, not always from laughter. “Is this better than my last show?” he asks an audience member who came last year. “No,” they say frankly, and it’s worse that you can tell they're not even angry, just disappointed.

Correos does this show under the guise of finding his “comedic voice” but it’s clear he’s far from locating it. Somewhere amid the desperation are a few decent sets about going to the Philippines for his circumcision and his more recent failed audition for a TV show in New Zealand. But he runs out of material half an hour in, checks his phone for the countdown five times and by the end literally begs us to go.

“Please leave,” he pleads, as he buys the last few seemingly-endless minutes of his set by dancing in his pants, a stray testicle poking out. “Please.” It's almost so bad it’s funny. Instead, we scramble out of the theatre a bit worried about what we’re leaving behind.