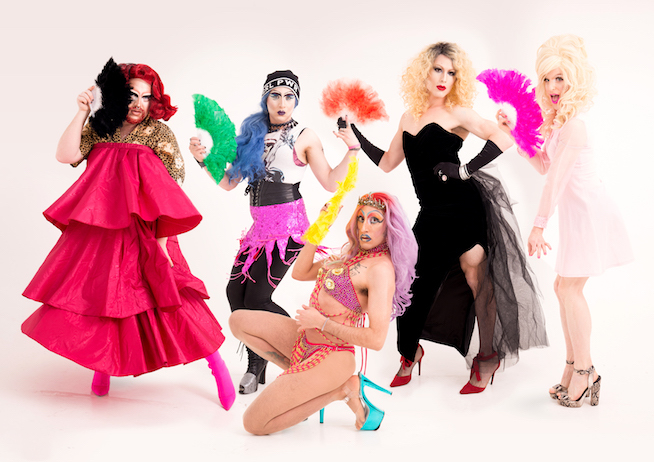 After a triumphant debut at last year’s Fringe, queer 'girl' group Denim split up, its five fierce queens parting ways to pursue their own projects (or so goes the narrative of this glorious party of a show). Fortunately for us, the girls are back, for one night only—for every night of the Fringe—performing their “greatest hits” along with a clutch of solo numbers in which they recount what they’ve been up to since the split.

Not all of these individual bits hit the mark—Shirley DuNaughty’s rebirth as a cult leader is a one-joke wonder that’s not funny enough to last an entire song—but the conceit is an excellent vehicle for the myriad talents of Amrou Al-Kadhi (Glamrou La Denim), Guy Woolf (Elektra Cute), Charlie Parham (Aphrodite Greene née Jones), Hugh Wyld (Shirley DuNaughty) and Tom Rasmussen (Crystal Vaginova). Parham and Rasmussen are a gorgeous vocal pairing; Al-Kadhi’s confessional about their destructive relationship with Islam has real comedic bite; and Woolf’s satirical takedown of cause-addicted celebrities is spot on.

Director Steve Marmion keeps the pace fast enough and the entertainment varied enough that if a number doesn’t appeal you can be confident that another one more to your liking will be along soon. And while you’re waiting, you can keep yourself occupied gazing on the wonder of the group's costumes (which they source and style themselves). Each queen gets at least one fabulous—and often totally unremarked upon—costume change, and most get two or three. Highlighting hairy chests and armpits, soft bellies and unpainted toenails, some of these costumes feel as subversive as the material coming of their wearers’ mouths. It's drag, but not as we know it – and that's all to the good.