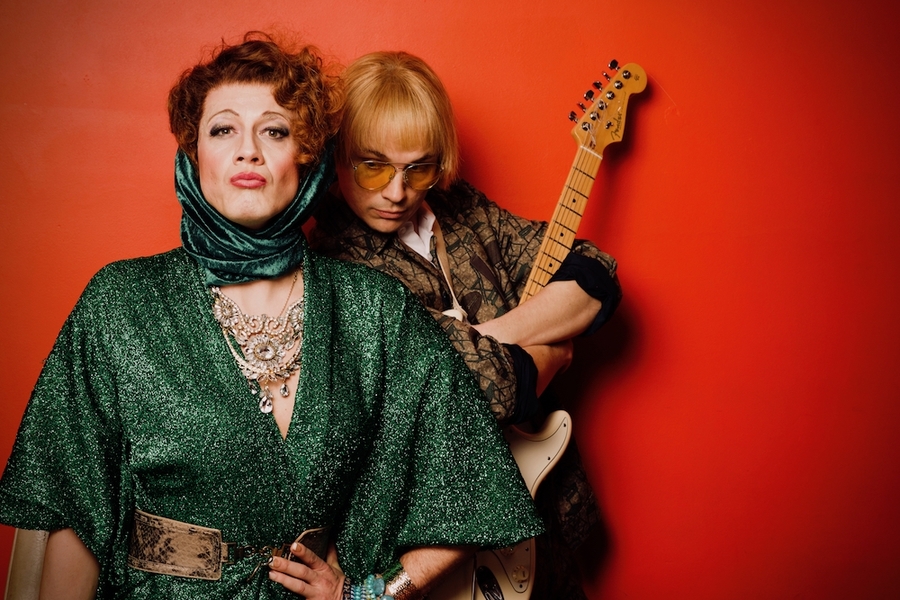 The Duchess. The Queen of Canvey Island. The (ssssh) alter-ego of David Selley. However you know this relic of ‘80s glamour, re-opening her “legendary” Essex club in Edinburgh this Fringe, know this: she thinks you’re gorgeous, and you’re all welcome here.

Selley has been performing as Diane Chorley for a number of years, but this is no workaday outing. Perhaps there’s the pressure of a purpose-built venue, The Flick nightclub, all palm trees, cocktails in kitsch glasses and the biggest goddamn disco ball you’ve ever seen. Perhaps it’s the opportunity afforded by doing a tight hour while also having a late-night cabaret at the weekends to let off creative steam (more on that later). Or perhaps it’s the crystallisation of years work. Whichever it is, this is kind, nuanced and joyful drag that, despite having its aesthetic heart in the ‘80s, feels remarkably apt for the time.

Essentially, Modern Love (4 stars) is a story of fall and redemption. Through narrative and song—with live accompaniment from multi-instrumentalist “Milky”—we hear how Chorley bought The Flick as a means of welcoming the rejects and the weirdos – a place to “make you feel normal, when normal life hurts”. Lost to the ego and excess of the ‘80s (metaphorically speaking) and fire (practically speaking), Chorley did jail time, and was released into a world she doesn’t understand. But, perhaps, she can teach us how to care for each other a bit more, just like they did in her heyday.

It’s a weird juxtaposition—conservative nostalgia and permissive tolerance—and one which, without trying to be too academic about it, manages to combine both a real empathy for working class anguish, and a hopefulness around liberal, loving alternative lifestyles.

If it sounds like a ridiculous backstory with scope for a lot of laughs, that’s also true, but it’s also remarkably tasteful. Rather than a ghoulish pastiche of the '80s, Chorley dresses quite demurely; instead of an easy, smutty waspishness we get a kinder, smarter style of joke. It’s tight, too, each eye roll and pout carefully pointed. The result is energising and uplifting, and terrifically funny.

So as not to put The Flick to waste, weekends sees Chorley host a late night show Down the Flick (3 stars). A much more loosey goosey affair, it’s a lot of fun, but also shows by contrast what a tight piece of work Modern Love is. Still, Chorley creates a wonderful atmosphere down The Flick, helped by guest acts. Tonight Crystal Rasmussen sings the roof off, Mawaan Rizwan nails a couple of his greatest hits and Jonny Woo makes a special visit to the Fringe to stick a firework up his bum. Chorley presides (accompanied by Milky) with care and wit. Please let’s not have this wonderful place burn down again. You’re gorgeous.