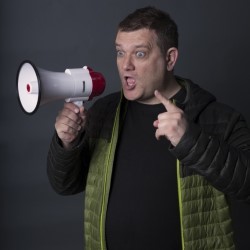 Opening with a raucous, rapid-fire piece of material on Rudolf Hess, Gavin Webster gets off to a whirlwind start. It's typical of Webster's scattergun approach: a dash of wordplay, an obscure reference or two and an overwhelming love of the form. His Geordie lilt lends easy comparisons to Vic & Bob and we get a sense of the double act's surrealism here too.

It's an hour of bouncing around topics and jokes that never lets the audience rest, and though there's a hint of old school club comedy, this show is certainly alternative enough to attract the much maligned millennials he regularly takes aim at. Webster claims he "is standup comedy" and it's hard to argue otherwise as he gambols through almost every form of the art (even picking up a guitar for a tribute to AC/DC—ask your dad—at one point). But a muddled ending in which he seemingly talks to the god of comedy is perhaps a bridge too far.

In between he takes swipes at young comedians, the industry and audiences, a bizarre move for someone who seems so content in his ability and profession. For a jovial gent to get his nose bent out of shape by a new generation feels odd and this unnecessary bitterness permeates an otherwise enjoyable hour.