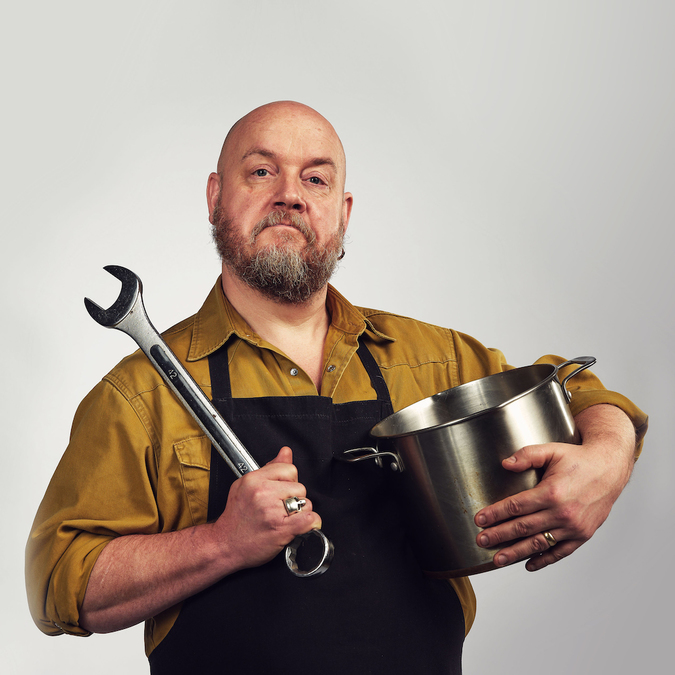 They say that history appears twice, first as tragedy and then as farce. When George Egg first broke onto the scene, he forced us to think outside the box – to look beyond the constraints of modern corporate-controlled life and seize control. Poaching fish in a hotel kettle wasn't just a way of making a tasty meal, it was an act of liberation conducted in a soulless hotel room – a way of seeking lemonade when modern life seemed tireless in its lemon supply.

What, then, to make of tonight's menu of chicken cooked in an oven done up to look like an engine, or aubergine cooked on a kitchen grill with a laptop sticker stuck on? Sure, it's not fair to criticise a comic for developing their act into something different, but what even is this? As a cookery demonstration it's fiddly but fairly beige; as an inspiration to do things differently it's a gaudy spectacle. Egg can still deliver flashes of inspiration (black lime powder, anyone?), he can sure fillet a fish, and he can't help but be likeable. But as he trundles out pedestrian banter on modern coffees, or Waitrose, it's not inspiration that's the predominant mode. Two Tim Key-like poems provide nice tonal variation, but don't sizzle. Ironically, the biggest laugh comes when he mentions the dishes from his previous shows.

If there's an image that sums up Movable Feast best, it's that of Egg using a cement mixer to toss salad – over-engineered, wasteful, unnecessary.