Review: I Spy With My Little Eye Something Beginning With Why Have You Been Sleeping With My Wife: A Play by Christopher Bliss 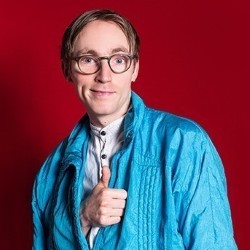 Modelling thick-rimmed glasses and bright shellsuit getup that's usually enough to prevent you going within 100 metres of a school, Christopher Bliss takes to the stage. His stage; the dramatic playground in which our multi-talented writer, director, and performer showcases his latest work of hubristic storytelling.

The man in question is, of course, a fictional character. Bliss is a Partridge-esque persona created by comedian Rob Carter, who embodies the role (a smarmy writer from Shropshire with delusions of grandeur) with just enough sympathy for us to stay on our protagonist's side. Carter does well to lose himself in the idiosyncracies of his alter ego without it turning into a smug, self-aware affair.

There's a touch of Ed Wood to Bliss too, as he enthusiastically presents us with the titular play, unaware that it might not be the masterpiece he thinks it is. That's where Carter has the most fun, layering the show to include a character-within-a-character, which allows him to play out some cleverly assembled chaos. There's some additional "cast members" (Bliss's mates, who, hampered by his ill-conceived direction, are routinely required by the script to "go to the toilet" and return to the stage as an entirely new character).

It's exactingly-written nonsense for the most part—Carter's hand is at work in even the most random of throwaway lines—and it's actually a miracle that Bliss's stream of non-sequiturs eventually arrange themselves into a coherent story. If it sounds confusing, that's because it is, but it's also the funniest, most lovingly amateurish "play" you'll see this festival.