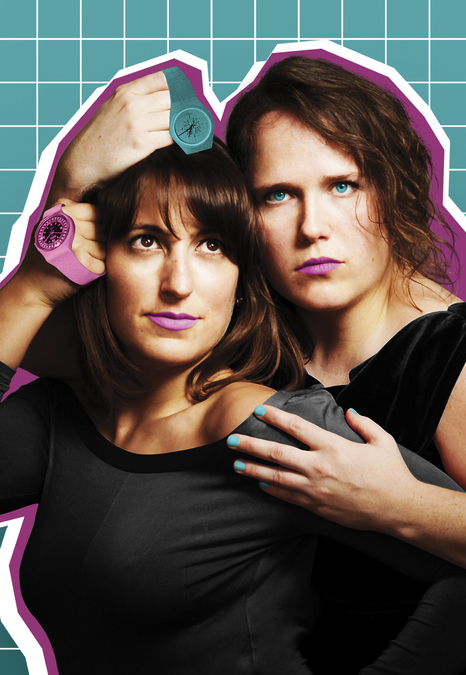 Anyone turning up at the Box expecting the whimsical musical act Flo and Joan—who are also on at Assembly, which has caused a wee bit of confusion—might be slightly taken aback by the duo who actually bound onstage and all but take them hostage.

As quasi-kidnappings go, though, this is fairly agreeable: standard Edinburgh-in-August stuff rather than full-on Stockholm Syndrome.

Now seasoned sketch-hour creators after a couple of successful Fringe runs, Lola Stephenson and Jo Griffin have gone high-concept this year, making full use of their shipping container base to launch a conceit in which we’ve all signed up for an escape room. That room is run by a couple of faux Scottish coppers, who dig for clues in a file of unfinished sketches by the seemingly-missing comedy duo.

It’s a nifty method for knitting sketches together—and for leaping out of them quickly while the audience do that very British-people-at-a-sketch-show thing of wondering whether to clap—and the skits are usually fun, if not fully realised: these are glimpses of promising characters, in truth, rather than strongly-written scenes.

Meanwhile the between-sketch bits feature some knowingly witty asides about comedy generally, and a burgeoning subtext in which the duo air deep-seated grievances about their offstage dynamic. These sometimes lengthy escape room sections can feel a little rushed and repetitive too though, rather than fully formed.

Which is a shame, as the hosts/kidnappers are fine performers, and the concept is solid. Escape could just have done with a little extra care and attention before being let loose.