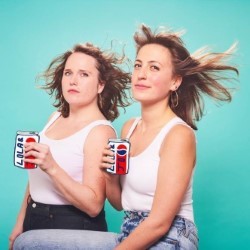 Forgive the blandly obvious opening gambit, but when you’re watching sketch comedy, you’re in it for the sketches. The linking device—if there is one—is secondary, with many young troupes eschewing one altogether. Gein’s Family Giftshop do that thumb-high-five thing between skits. Massive Dad kind of had a videogame character selection thing that one time. Few tussle with more than that.

Lola & Jo have gone the other way, bravely giving as much oxygen to their framing conceit—that we’re participating in a focus group study to trial a new “product”, aka, some sketch comedy—as to the sketches themselves. And for all its imperfections (not every joke is a winner, and some light editing is needed to make some scenes really fly), it works.

Sweating in the nauseatingly-named Underbelly space Delhi Belly, audiences know the bar for production values is set quite low. But these consummate comedians get by pretty well with little more than whiteboards, Pringles and tampons, because they’ve written some damn good scenes. As writers they’re accomplished, with swift, vivid imagery and characterisation that’s relatable but not stereotyped. The focus group facillitators are pitch-perfect marketers, spouting dry jargon that often stumbles into the absurd. The sketches are quick and painless, referencing brash wedding photographers, overly particular flat party organisers and—most inventively—ghosting via WhatsApp.

The cherry on the cake is their vocal work. Focus Groupies doesn’t quite show off what must be a broad range of accents and characters, but what it does feature is very polished – especially the facilitators’ telltale ‘consumer feedback’ intonation. Wrap it all up in a functionally meta-comedic bow—it’s a comedy show about comedy, after all—and you’ve got one product that should pass approval.