Spanking portrait of the prime minister 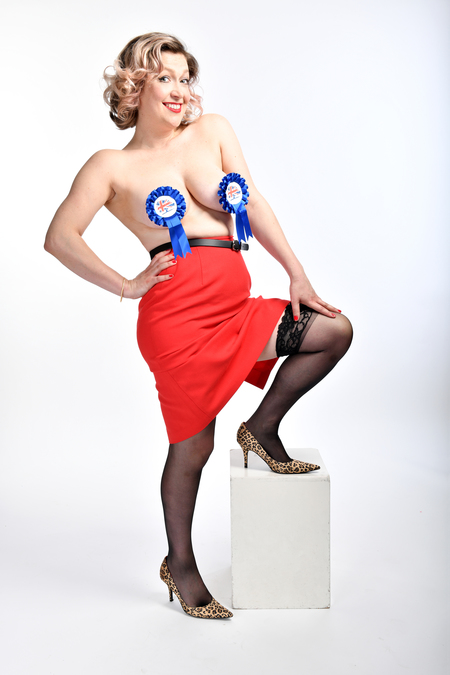 Call it the release of Brexit anxiety, but Fifty Shades of May is much greater and far more enjoyable in sum than its disparate parts have any right to be. Linking pivotal speeches over the course of Theresa May's embattled premiership, Lolly Jones' lip-synching, hybrid blend of character comedy and burlesque razzle-dazzle goes way beyond titillating hi-jinks to deliver a memorable portrait, one that truly engages your sympathy for our awkward prime minister.

From her opening grimace as she apologetically takes the stage, declaring herself not a showy politician, via more convincing jerks through The Robot and any number of dance moves, costume changes and stripteases, Jones' May seems trapped in a farce she can barely comprehend, let alone control, plotted with Britain careering towards its unknown EU departure.

Whereas in reality, this evasive, private politician repeatedly dodges and obfuscates journalists' questions, the expressive performance brings her inner panic to the surface, making feather dance and nipple tassels her triumphs and torments, via upbeat pop and show tunes. With Jones also appearing as Nicola Sturgeon, Arlene Foster and Angela Eagle, each with varying degrees of self-assurance, and backed by two hunky, hot pant-sporting dancers, the show's feminist credentials are very much left open to interpretation.

That's reinforced by the Fifty Shades theme, introduced with filmed inserts of a controlling, increasingly sadomasochistic Jacob Rees-Mogg, played by mimic Liam Hourican, who also appears as Gerry Adams in Fosters' Chicago-channelling number. Cheekily satirical, this is a spanking response to Brexit doom and gloom.