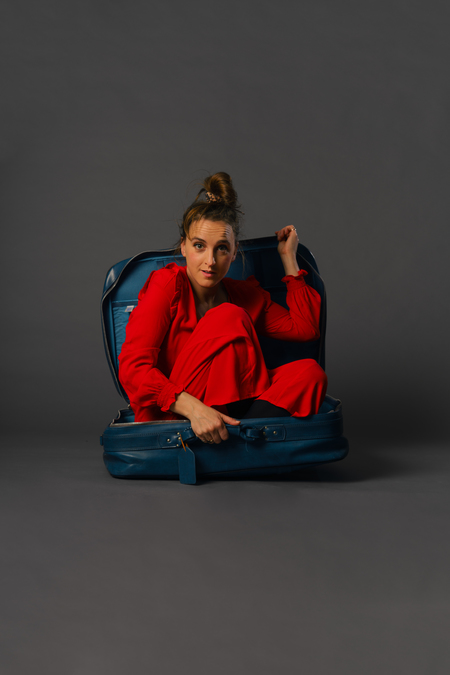 Lucy Pearman’s outlandish solo show wants to strip us of our burdens. Packed inside a suitcase, she needs to get through luggage allowance. Each time she tries, she’s rejected and told she’s “too much”. Over the course of the absurdist show, Pearman asks for our help, wanting to get to the “just right” marker.

Weighed on the scales via the arms of an audience member, Pearman keeps stripping herself down—possessions, clothes, skin—all the while trying desperately to make herself fit measures determined by other people. For a show about fragility, this inventive hour of clowning is messy and destructive.

The show itself is lighter than its conceit. Often blending the twee and the grotesque, Pearman is an eager host, in turn welcoming and acerbic. As we help her offload through a series of increasingly over-literal tasks, she is generous by the bucketload, and her genial manner makes us so keen to take part that one audience member accidentally goes up uninvited.

Packing never quite goes to plan. Tech fizzles and breaks at every opportunity, while an unnecessary aide in a black morph suit haphazardly helps her out with stage management. Pearman is so charming it hardly matters, but the overreliance on props in the first place gets in the way.

Buried in the bag under all the jumpers and jokes is Pearman’s fear of moving away, and of leaving bits of herself behind. Though fairly on-the-nose, Baggage is handled with care. An irreverent, playful demonstration of how we’re all just holding ourselves together.