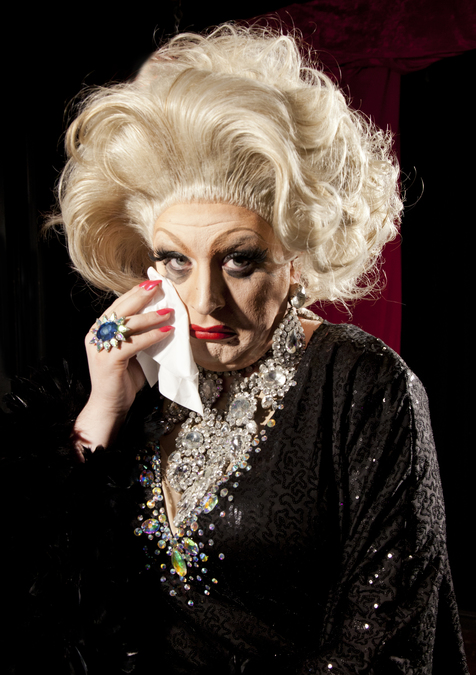 “I’m D-E-A-D dead!” sings drag queen Myra DuBois—South Yorkshire’s smuttiest export—at the beginning of her fresh hour of witty, waspish comedy, Dead Funny. DuBois has decided that she’s the only one capable of delivering her eulogy, so she’s doing it now – and then she’s going to euthanise herself at the end of the show. It’s a funeral in reverse. “Someone called this show morbid,” she quips. “Can’t think why.”

It’s an unsophisticated but effective structure, and one that allows DuBois to regularly deploy her strongest suit of supreme self-aggrandisement and disdain for the audience. “You mean nothing to me,” she reminds us. “I mean everything to you.” She knows she’s popular with “the acronym-ed community”, and has shrewishly pokes fun at the gay men in the audience throughout.

She’s opted for a Wiccan ceremony (there’s quite a few paedophile jokes pointed at the Catholic Church before she decides), which means there are poems about her, speeches about her and songs about her. There’s even a Skype call with her dowdy, down-to-earth sister – the only glimpse we get behind the veil of her extravagant mourning dress.

If there’s a weak link, it’s the songs. Composed by Richard Thomas of Jerry Springer The Opera, they’re an underwhelming array of mulchy ballads, made worse by witless lyrics. But when she belts out Annie Lennox’s 'Why' at the conclusion, hilariously and horrendously out of tune, you remember why we’ll miss her so much. Good thing she’s decided to live on after all. She’ll probably keep going forever.