Review: Myra Dubois: We Wish You A Myra Christmas

High camp and big on laughs 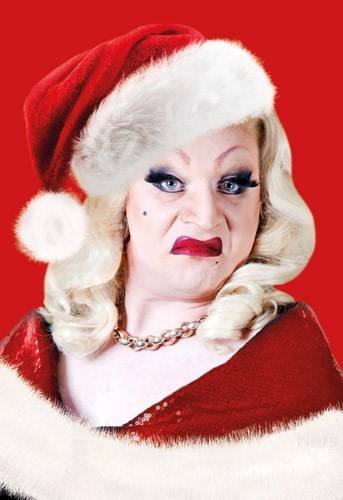 You've got to hand it to Myra Dubois: it's an audacious move to bring a Chrismas show to the Fringe. And then put it on in the Wee Cow, scientifically proven to be the hottest venue in Edinburgh. As Dubois might say, my chestnuts were roasted. Except Dubois' catty barbs are a cut above that – in quality, that is, not taste. Whatever the festive equivalent of the gutter is, Dubois is in it.

As audious a move as it is, Dubois largely pulls it off (sorry). Essentially, Dubois (the drag creation of Gareth Joyner) is having a bit of a joke with us, seeing how far and how out-of-context she can push an hour of smutty snipes. Pretty far, it turns out. If your act consists of slagging off your game audience, it doesn't really matter what month it is.

This isn't big or clever, and Dubois is utterly unafraid of drawing attention to her similarity to a pantomime dame. She isn't wrong, either. But it is high camp and big on laughs. Those jingle bells? It's just the sound of a seasoned pro smashing it.