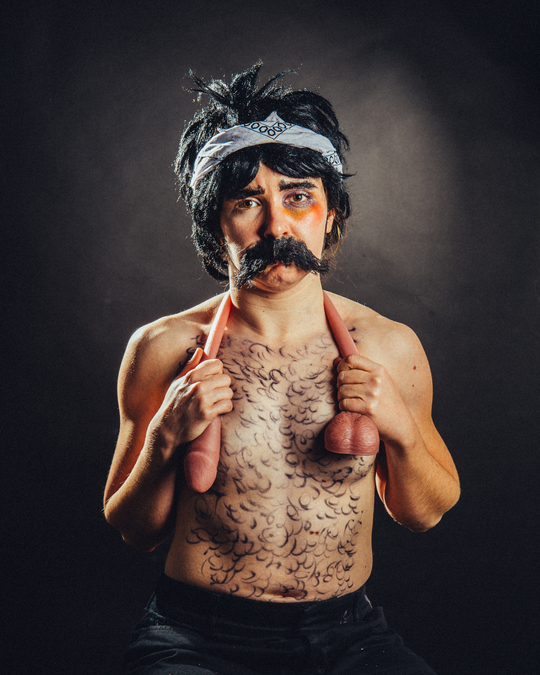 How do you set about embarking on a suitably worthwhile project when the Best Newcomer Award is glaring down at you from the shelf/mantelpiece/toilet? You use that gong as the industry’s tacit go-ahead to tackle the most contentious subject in comedy, by crafting this extraordinary spectacle, complete with its own inbuilt debate. There’s even a nod to last year’s show, for the egg heads.

Natalie Palamides roars onto the sizeable stage as Nate Palamino, who looks like a backwards woodsman, but turns out to be a fairly sensitive dude. Well, after a show of machismo, in which the American comic has a rad time downing cans and breaking stuff. And yes, there is some raw egg action.

Soon enough we’re onto the main theme though. “May I?” asks Nate, as he suggestively approaches various audience members. Now, interactive comedy is an interesting place to discuss consent: we’ve all seen reluctant people persuaded onto stages by coercive comics and baying crowds. Long before things get darker here, Nate persuades a front-row guy into a physical encounter that leaves him undressed and seriously messy. Did he really want to go that far?

Eventually Nate gets into a more intimate situation in which the coercion is flipped, but the repercussions resonate: for him, her, and the audience, who he actively questions. Was he wrong? The responses are mixed and fascinating, volubly highlighting how complex these issues can be, and how comedy shows are a curious place to seek answers. But those discussions will continue afterwards.

Hilarious, heavy, but lovingly handled, Nate is a mighty piece of work.