Review: Olaf Falafel: There's no i in idiot

Weird and wacky, and often very funny, but random and rapid-fire. Short, scattergun bursts of comedy. 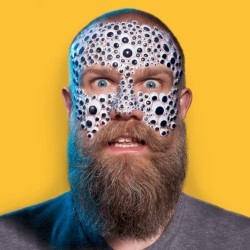 Olaf Falafel: There's no i in idiot

Olaf Falafel—children’s illustrator and eighth funniest Swedish comedian, by his own report—found fame making six-second clips on the deceased viral video website Vine. It shows in his standup – it’s weird and wacky, and often very funny, but random and rapid-fire. Short, scattergun bursts of comedy.

As a result, it’s very hit and miss. His hour, the gloriously named There’s no i in idiot (surely one of the best show titles going), is a jumble of absurdist one-liners, ironically twee observational stuff and audience work with a surrealist tinge.

Some of it works well. Like "Biscuitology", a recurring segment in which Falafel determines an audience member’s character based on their favourite biscuit, horoscope-style. Or his big finale, a Spencer Jones-ish summoning of the ghost of The Cure frontman Robert Smith (still alive, don’t worry).

Other bits are decidedly ropey. When he dips his toe in the murky waters of racism, there’s a collective clenching of arseholes in the audience. His material—a riff about dolphins being racist—is okay, but only okay.

The real flaw with Falafel’s show is in its lack of fluency. This hipster pirate/forgetful circus strongman/Neanderthal with an ASOS account (his own descriptions) hops from topic to topic, style to style, like a kid in a candy shop. He still hasn’t quite got a handle on his own material, which exacerbates things, but even if the show gets smoother as the festival continues, it’ll still be a pretty bumpy ride.