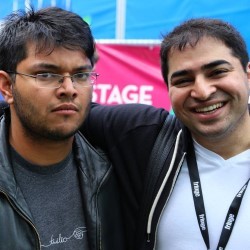 The premise behind Rule of Three is an interesting one as it cleverly encourages audience participation, without it being intimidating. Every night, three standup comedians take it in turns to perform fifteen minutes of material. Most of it is tried and tested.

The catch? Each performer is tasked with the challenge of sneaking in a piece of brand new, previously untried material, written that very day. If the audience correctly guess which joke is new, that comic doesn’t get their cut of the night’s earnings.

Daniel Auditt showcases a brilliant new joke comparing searching for a partner with buying a house, with some insightful observations about falling in love. The skill here is in moulding a piece of untried material into an already established set, and Auditt does this with apparent ease.

The highlight, however, is Sid Singh. He’s the backbone of the show, with a confident and animated comic voice. He tests out quite a few new pieces of material, and other than the stunted pauses between them, you might not have guessed that they aren’t already a part of his current show.

But the threat of the audience guessing the joke needs to be at the forefront of this show if the format is to work and it often feels as though it gets forgotten. Being one of the latest shows of the day, it doesn’t seem as though anybody is particularly bothered, but if the show isn’t going to stick to the format then there might as well not be one.