A surfeit of talent in a lack of structure 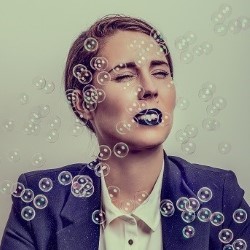 Stevie Martin is a natural clown, seemingly inhibited by her past life as a comedy critic. On the evidence of Vol. 1, her debut solo hour, she is paralysed by self awareness, unable to move beyond meta analysis of performance and comedy tropes.

As she herself points out, the show consists entirely of openings. In addition to a series of alternative curtain raisings, she serves up an array of abruptly curtailed sketches, enacting ideas of varying potential yet allowing none the opportunity to stand or fall on their own merit. This means that while the set never slumps, it flounders in a state of stasis.

Moments intended to hit extremes, test our patience and strip the star of her dignity lack the high impact they should have as they are presented with no sense of context. The show lacks an overarching form, and so the material has little cumulative impact – all smoke, no mirrors.

It's necessary to focus on these negatives only as a way of figuring out how something so inventive and consistently funny doesn't completely satisfy. Vol. 1 comes recommended as a hugely auspicious debut notable for Martin's surfeit of left-field ideas and pitch perfect delivery. It's just there's something lacking that the performer will have hopefully found by Vol. 2 or, better yet, the end of this Fringe run.